“I don’t think Vermonters understand the Mack truck that coming at them… They don’t understand how this is going to impact their lives and what it’s going to cost."

In 2020, the Vermont legislature passed the Global Warming Solutions Act (GWSA) (Act 153) over the veto of Governor Phil Scott. The basic crux of the law mandates that Vermont must lower its greenhouse gas emissions to 26% below 2005 levels by 2025, 40% below 1990 levels by 2030, and 80% below by 2050. Authorized by the GWSA, the 23-member Climate Council released its "Climate Action Plan" in December 2021. Perhaps the foremost pillar in the Plan was the "Clean Heat Standard."

During the 2022 legislative session, Vermont's Legislature took most of the Climate Council's recommendations for its Clean Heat Standard (CHS) bill. The CHS would have made obtaining fossil fuel based heating fuel much more expensive and difficult, an effective 'carbon tax.' Due to the efforts of Vermonters across the state and political spectrum, the Legislature fell one vote short of overriding Governor Scott's veto on May 10, 2022. Just 6 days later, the Climate Council reiterated their support for another attempt at the Clean Heat Standard in 2023.

While the Clean Heat Standard did not pass in 2022, the GWSA still grants legal standing for anyone, Vermont citizen or not, to sue the state and claim attorneys' fees at Vermont taxpayers expense if Vermont does not act quickly enough, in the perception of Vermont judges.

During the August 18 meeting of the Cross Sector Mitigation Subcommittee, members discussed the possibility of an “economy-wide cap and invest” carbon tax, beyond the scope of the Clean Heat Standard tax on heating fuels.

Parts of the Clean Heat Standard

The Climate Action Plan in entirety 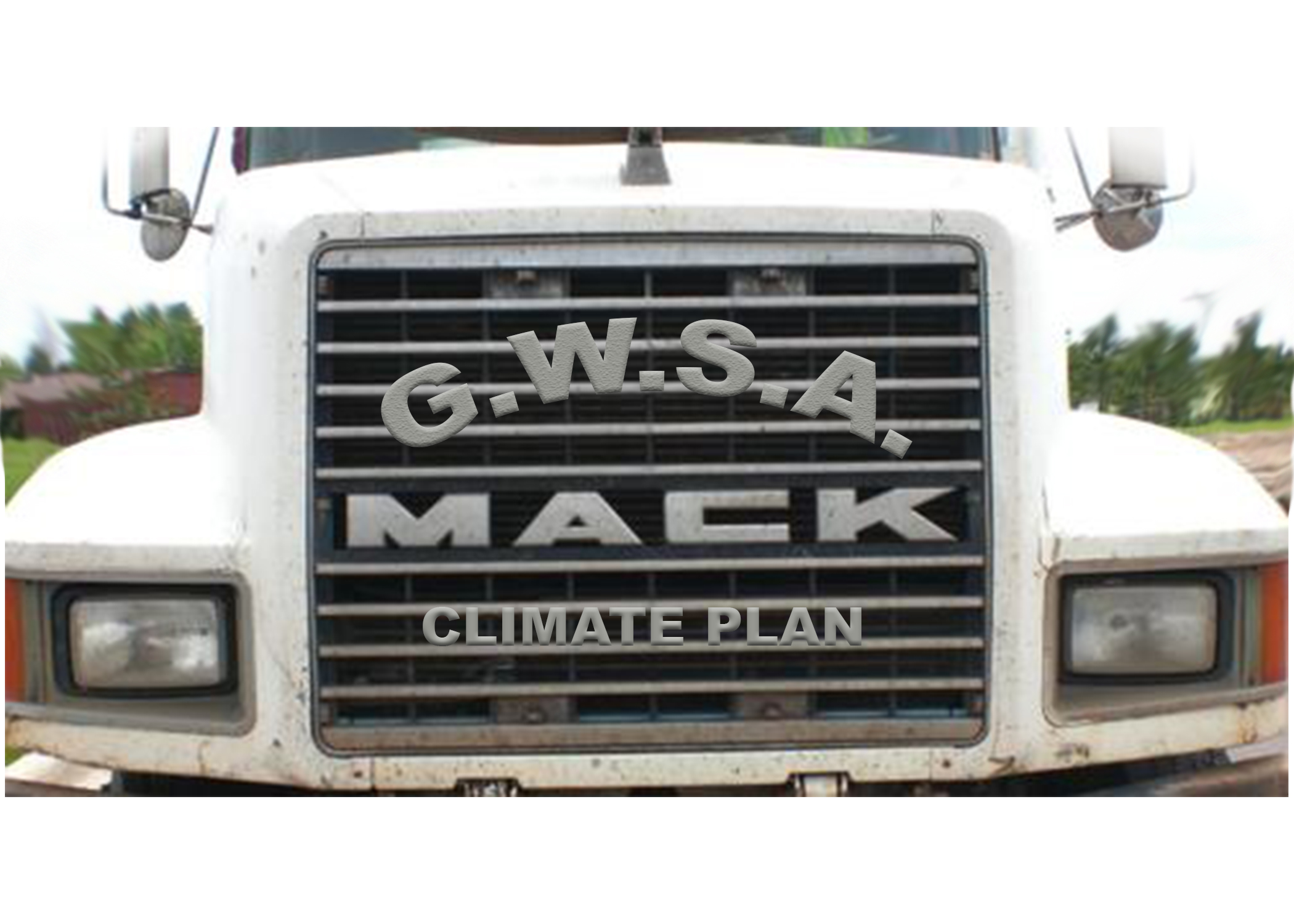 With your help, we can reach more. 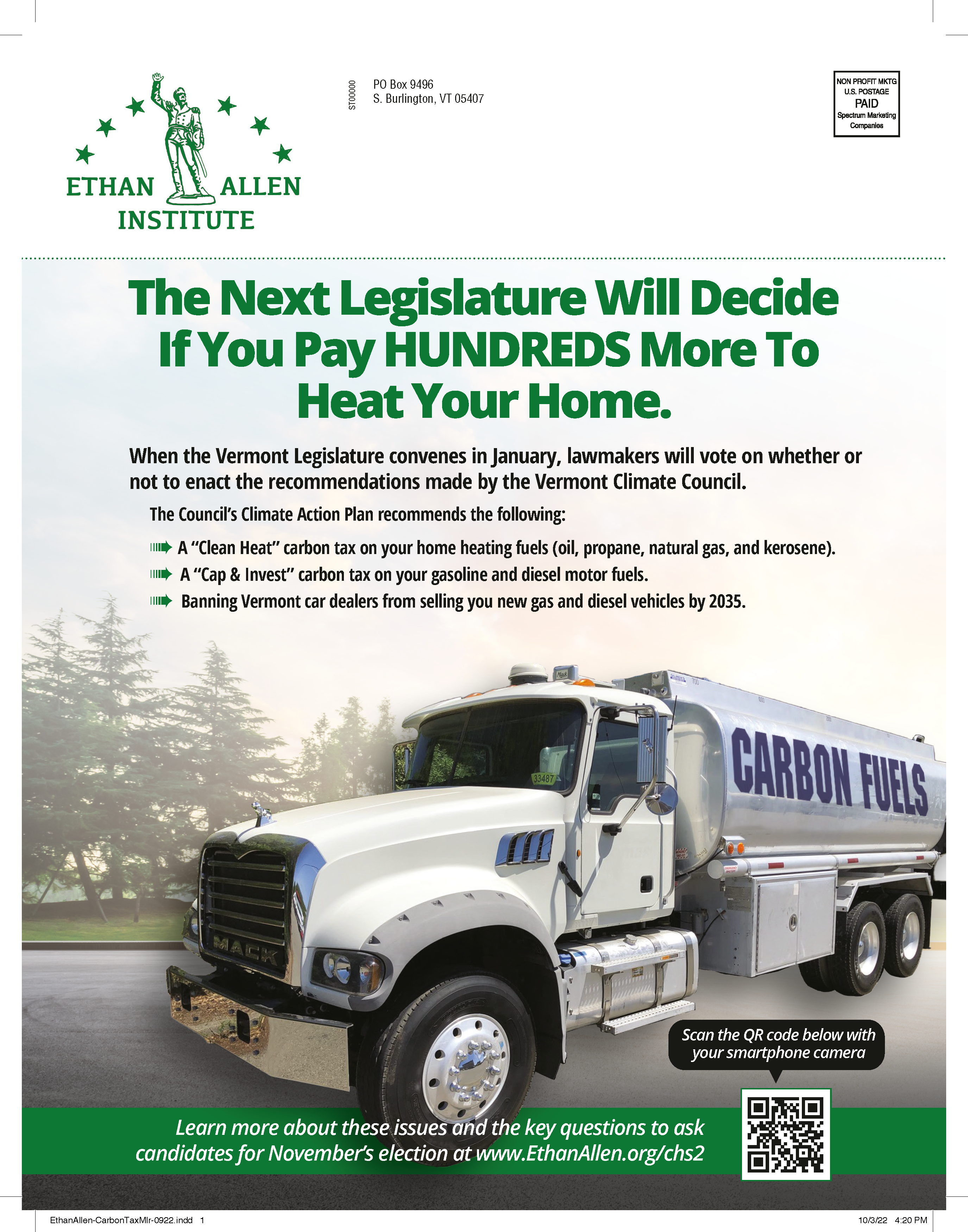 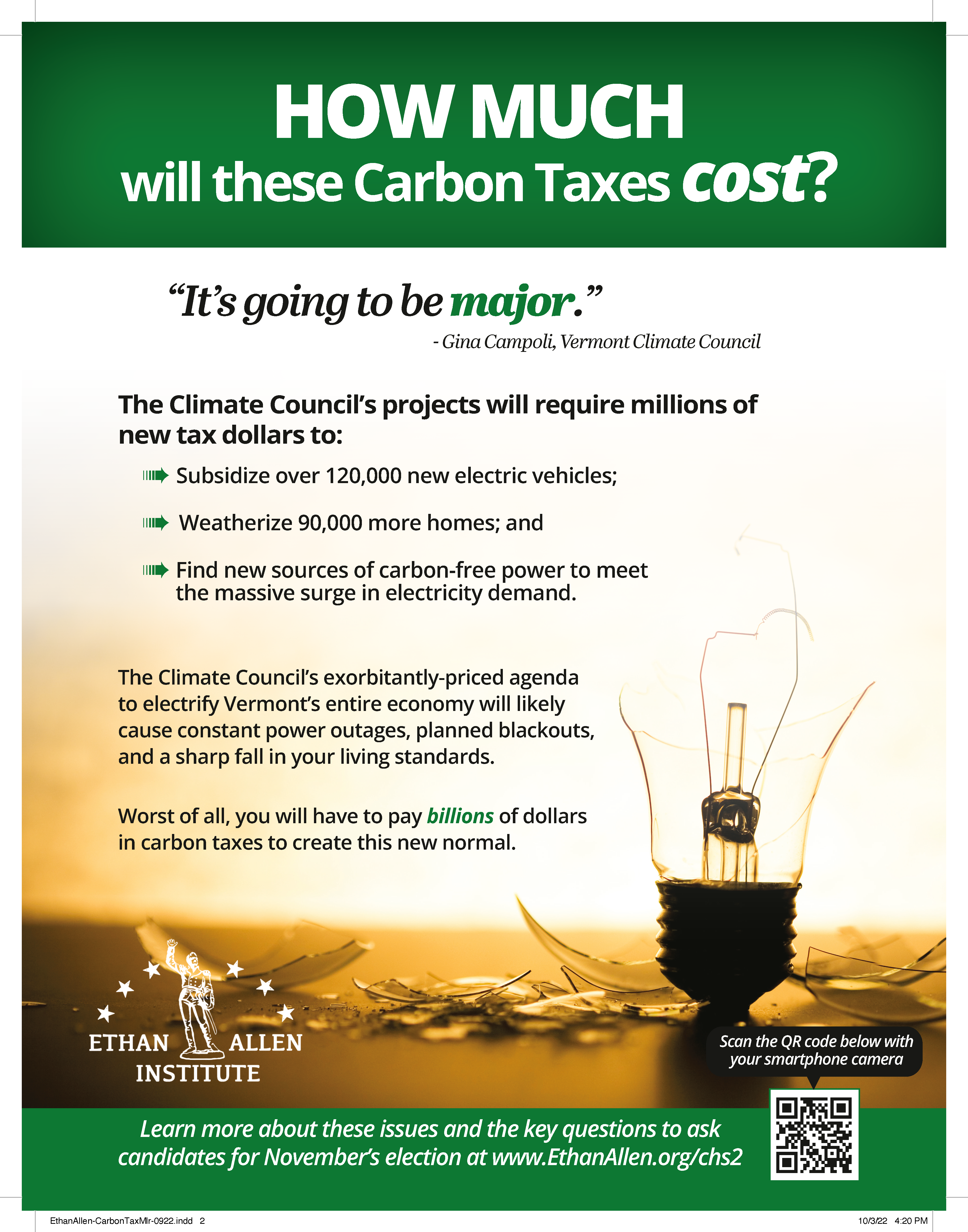 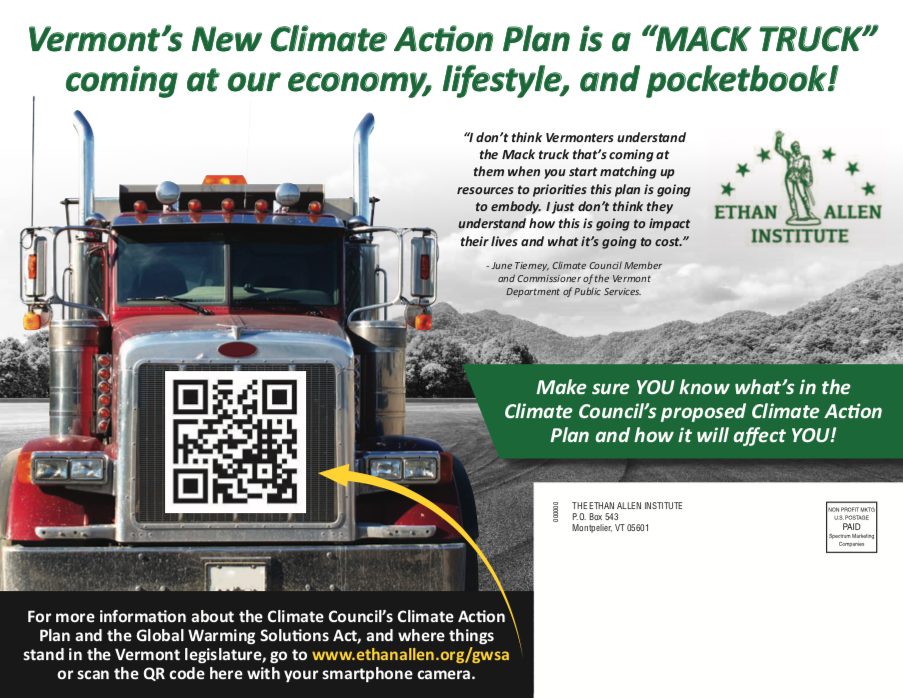 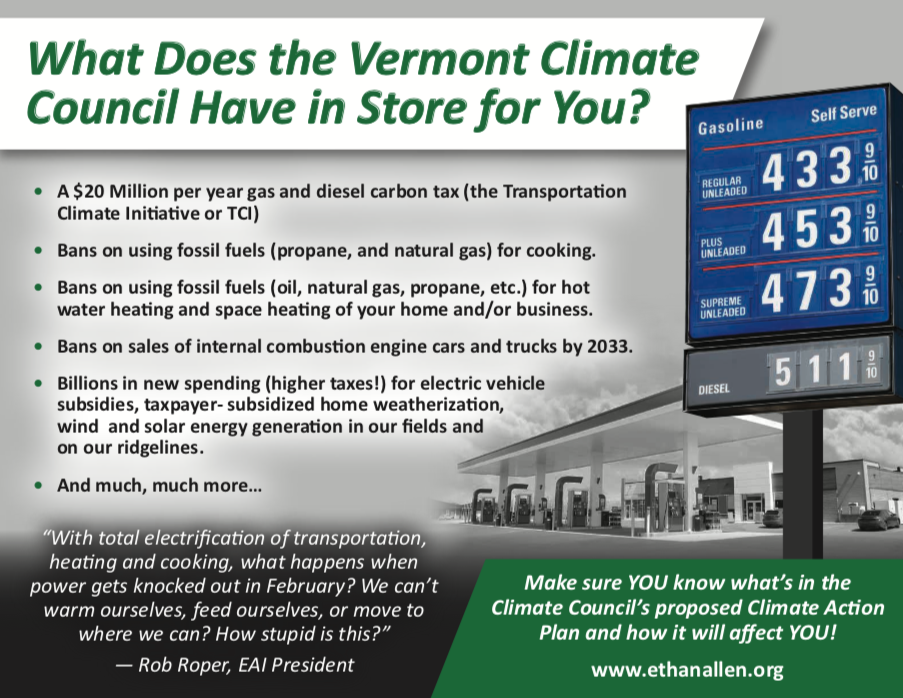 The Check Back for Legislative Accountability - John McClaughy, 4/19

GWSA May Stop REC Cash Flow, but Not Our Reliance on Natural Gas - David Flemming, 3/21

GWSA Is a "Mack Truck" Heading at Vermonters - Rob Roper

The Debate: Arguments for and against the Clean Heat Standard

“The IPCC has found that climate crisis is both caused and exacerbated by greenhouse gas emissions that result from human activity. The IPCC has determined that industrialized countries must cut their emissions to net zero by 2050, which is necessary to achieve the Paris Agreement’s goal of keeping the increase in global average temperature to below 2°C. A climate emergency threatens our communities, State, and region and poses a significant threat to human health and safety, infrastructure, biodiversity, our common environment, and our economy” (GWSA).

Vermont must help accelerate solutions that address the climate crisis in the absence of federal action. By implementing climate mitigation, adaptation, and resilience strategies, Vermont will also position its economy to benefit and thrive from the global transition to carbon neutrality and national and international efforts to address the crisis. Delaying necessary policy action to address the climate crisis risks significant economic damage to Vermont. (GWSA) Under the Vermont Global Warming Solutions Act of 2020 and 10 V.S.A. § 578, Vermont has a legal obligation to reduce greenhouse gas emissions to specific levels by 2025, 2030, and 2050. 72 percent of Vermont’s thermal energy use is fossil-based, including 43 percent from the combustion of fossil gas and propane and 29 percent from the burning of heating oil.

It also needs to do this equitably, recognizing economic effects on energy users, especially energy-burdened users; on the workforce currently providing these services; and on the overall economy.

To meet the greenhouse gas emission reductions required by the Vermont Global Warming Solutions Act of 2020, Vermont needs to transition away from its current carbon-intensive building heating practices to lower carbon alternatives .

The Clean Heat Standard, administered by the Public Utility Commission, is the most efficient and effective method of stimulating switchover from fossil fuel heat systems to alternative emissions reduction solutions, such as cold climate heat pumps, advanced wood pellet heat, and home weatherization. By issuing Clean Heat Credits to persons and businesses facilitating such switchover, and creating a marketplace where fossil fuel distributors can acquire the credits needed to meet their obligations under the Act, the PUC can stimulate and manage the necessary switchover.

Most knowledgeable people agree that barring natural cooling effects (such as aerosols), the average global temperature is likely to increase by one degree C by 2100, and that anthropogenic emissions of greenhouse gases such as carbon dioxide will make a significant contribution to that trend. Many however, do not characterize this prospect as a “climate emergency”, and indeed, compared to the cooler earth of 150 hundred years ago, a warmer earth in 2100 will bring offsetting benefits.

However, there is no reason to believe that reducing Vermont’s heating and transportation emissions even by 100% will have any detectable effect on that temperature, especially in view of the fact that two 1500 Mw coal burning electric plants now being built in China will emit more CO2 that all human activity in Vermont combined.

The Clean Heat Standard, as recently candidly described even by its leading Senate advocates, is another carbon tax. It will be imposed by the unelected Public Utility Commission in such rising amounts needed to achieve the GWSA emission reduction requirements. It will be borne in the form of higher heating oil and gas prices paid by Vermont families, businesses, farms, municipal governments, hospitals, schools and many others.

Like all retail level taxes on essentials, the CHS costs will be regressive, claiming a higher percentage of income of low and moderate persons and families.

The PUC will have complete control over the amount of clean heat credits to be issued, and ultimately paid for by consumers in the form of higher heating fuel costs. This is unacceptably threatening when heating fuel prices are rising to record levels.

The January 2019 Resources for the Future report commissioned by the legislature concluded that no imaginable level of carbon taxes would drive down CO2 emissions to Vermont’s targeted levels, and the economic welfare losses from a significant carbon tax would be offset only by imagined “climate benefits” accruing to the entire planet. Vermont should not beggar its people by forcing them to shoulder the burden of carbon tax schemes where the benefits, if any, accrue to the rest of the planet, most of which is not requiring similar burdens of its people.

As the Vermont Fuel Dealers Association has found, the actual workings of registering fuel suppliers, tracking every gallon of fuel throughout its journey to combustion, issuing and keeping track of marketable clean heat credits, intercepting unregistered importing of fuel, and enforcing “non-compliance payments” (fines) will be an extraordinary difficult and costly administrative burden.

Carbon Tax Timeline: How did Vermont get here?

PLEASE HELP SUPPORT OUR EFFORTS TO EDUCATE VERMONTERS ABOUT THIS
AND OTHER IMPORTANT POLICY ISSUES FACING OUR STATE.

PS. The Ethan Allen Institute is a 501(c)3 non-profit organization. All contributions are tax deductible and anonymous.