In this third and final installment of an investigative series into Vermont election security and the impacts of S.15, we look to Town Clerk feedback, and what simple measures could be included in S.15 to make it work, and another option to mass mailing ballots every election.

As we discovered, Vermont is not one of the 34 states that require some form of identification to vote. Vermont does not have voter signature verification. Vermont voter rolls are difficult to maintain and purge inactive voters, or voters who have moved. While officials boast no fraud has been proven, this fact is just as likely to be the result of a near total inability to detect fraud as the absence of it. S.15 would put Vermont in the unenviable position of having the least secure election process in the country.

“The bill [S.15] as passed by the Senate includes a number of provisions that will make permanent changes that were put in place during the COVID pandemic including authorizing outdoor polling places and drop boxes, allowing early processing of absentee ballots, establishing protocols around vote-by-mail, and setting up systems for allowing voters to cure defective ballots.  All items included in the bill expand voters’ access to the voting booth and ballot box, and the right to vote, while protecting the integrity of elections state-wide.

“Clerks bring a unique point of view to the table, as the ones who are doing the work “in the field,” stated Dawes.

It is worth noting that in Dawes’ statement she claims S.15 ‘protects the integrity of elections state-wide,’ but lists no specific measures about how the law actually does this ‘in the field.’

While some Vermont clerks might support S.15, this is not universal. Donna Kinville, Clerk for South Burlington, has testified in front of Vermont legislative committees about weaknesses in the system. Reached for comment about the following real-world scenario of a campaign volunteer and the ease of committing fraud, she responded below in bold italics:

1) As a campaign volunteer in the final month of a VT campaign (after ballots have been mailed out), I would be knocking on doors, and asking people if they need help understanding their ballots or if they need assistance getting to the polls on election day (totally legal and ethical). Households who receive ballots for persons no longer living there may ask what to do with them in the natural course of conversation. “I can take care of those for you,” I respond and take them.

KINVILLE: “That would be completely possible as there is no signature verification process for early voting in Vermont.  However, a family member can request one now for everyone in their house and some of them may be college students voting in another state that has not updated their voter status in Vermont.  They could also vote those early.”

2) I now know two important pieces of information; a) the person is no longer in the area but is still on the voter list, and b) the likelihood of them showing up to vote in person is almost zero.

KINVILLE: “Pretty much correct, although without being able to ask for identification, someone could vote using their name at the polls on election day.  We are large enough of a city that it would be very easy to do as the election workers can’t know everyone in their district.”

3) I fill out the ballot, and envelope, and do it carefully to make sure all is correct, and the signature is vague but neat. It is mailed in, and if nothing is wrong with the information on the envelope, the name is marked as “already voted” on the voter rolls, but the ballot is not counted until election day. When the intended person doesn’t show up to vote in person, the ballot is removed from the envelope and commingled with the in-person ballots and counted.

KINVILLE: “The early ballots are never held until the end of election day to see if someone shows up to vote or not.  An early ballot can be processed 2 ways.  First if we are allowed to do early processing of ballots.  If we do early pre-processing that ballot has already been marked off on the checklist and opened and put through the tabulator.  No way to know which ballot it was and pull it out.  Secondly, if we don’t do early preprocessing of ballots, then the ballot inside the envelope is brought to the polls and through the course of the day processed by the front check-in table and handed to the election officials to open and put through the tabulator.  So, it would depend on numerous variables when it would be processed but usually done by 11:00 a.m. and no way to retrieve that ballot once it is voted.”

As confirmed, the lack of security and difficulty in keeping voter rolls efficiently accurate could lead to great uncertainty and ease of committing fraud in a multitude of formats. Emails to the VMCTA concerning the security issues listed above were not returned prior to publication. Further emails to the Secretary of State’s office were not returned prior to publication.

However, there are many solutions, and most of them are relatively easy given the low population in Vermont.

At its very first hearing, a special Pennsylvania Senate committee, formed in the wake of the 2020 election cycle controversy and Supreme Court cases, turned to Utah for advice. The Vermont legislature could gain valuable insight from them as well.

Utah, a long-term conservative state, has been using Vote-by-Mail for their elections since 2012.

Justin Lee, Utah elections director, shared valuable information with the committee on how they achieve a high degree of security, while also increasing convenience and massive voter participation, in the following excerpt from the Deseret News:

Lee told the committee Utah hasn’t seen widespread voter fraud, but there have been instances where voters have signed a ballot on behalf of someone else, such as a spouse, partner or child who might be away at school. County officials catch those cases because they verify every signature against the voter’s signature in the state’s database, he said.

If that happens, voters are informed that they are committing a crime.

“We don’t see a lot of repeat offenders when we reach out and let them know that,” Lee said.

Over the years, the larger concern among Utah voters has been to make sure election officials don’t discount their ballot because the signature on the envelope doesn’t match the one in the database due to age, injury or “neat or messy” handwriting on any given day, he said.

Counties have a system in place that allows voters to “cure” an issue with a signature. County clerks reach out through email, letter, phone call or text message to have them verify whether they signed the ballot, which also provides an opportunity for a county to collect a more up-to-date signature.

Utah also has a tracking system on its elections website that allows voters to see if a county clerk has received their ballot and if it was counted. Going forward the state will add text and emails notifications to let voters know the status of their ballot, Lee said.”

According to the article, “in 2020, about 90% of Utah voters voted by mail in the March presidential primary, 99% in the June state primary, and about 93% in the November general election.” Clearly the idea that higher integrity leads to lower turnout is not realistic.

Messages to the Utah Lt. Governor’s office (Utah has no Secretary of State) to inquire about the specifics of how county clerks maintain clean voter rolls were not returned prior to publication time. However, their website lists several ways, and it is constant process, meaning the clerks have much more control and efficiency in Utah than here in Vermont.

Another alternative to mass-mailing ballots for absentee voting is blockchain system voting. If the goal is extreme accessibility and ease of voting, then why not contract with a New England company to do absentee voting via smartphone or tablet? “Blockchain” is an open-source distributed ledger or database system in which an updated copy of the records is available to all stakeholders at all times. Due to this distributed nature, it is almost impossible for a single person or company to hack everybody’s ledger, ensuring security against cyberattacks. This has led to the rise of several companies using the security aspects to create mobile voting systems for absentee voting. Several elections have already used the technology with more adaptation on the way. 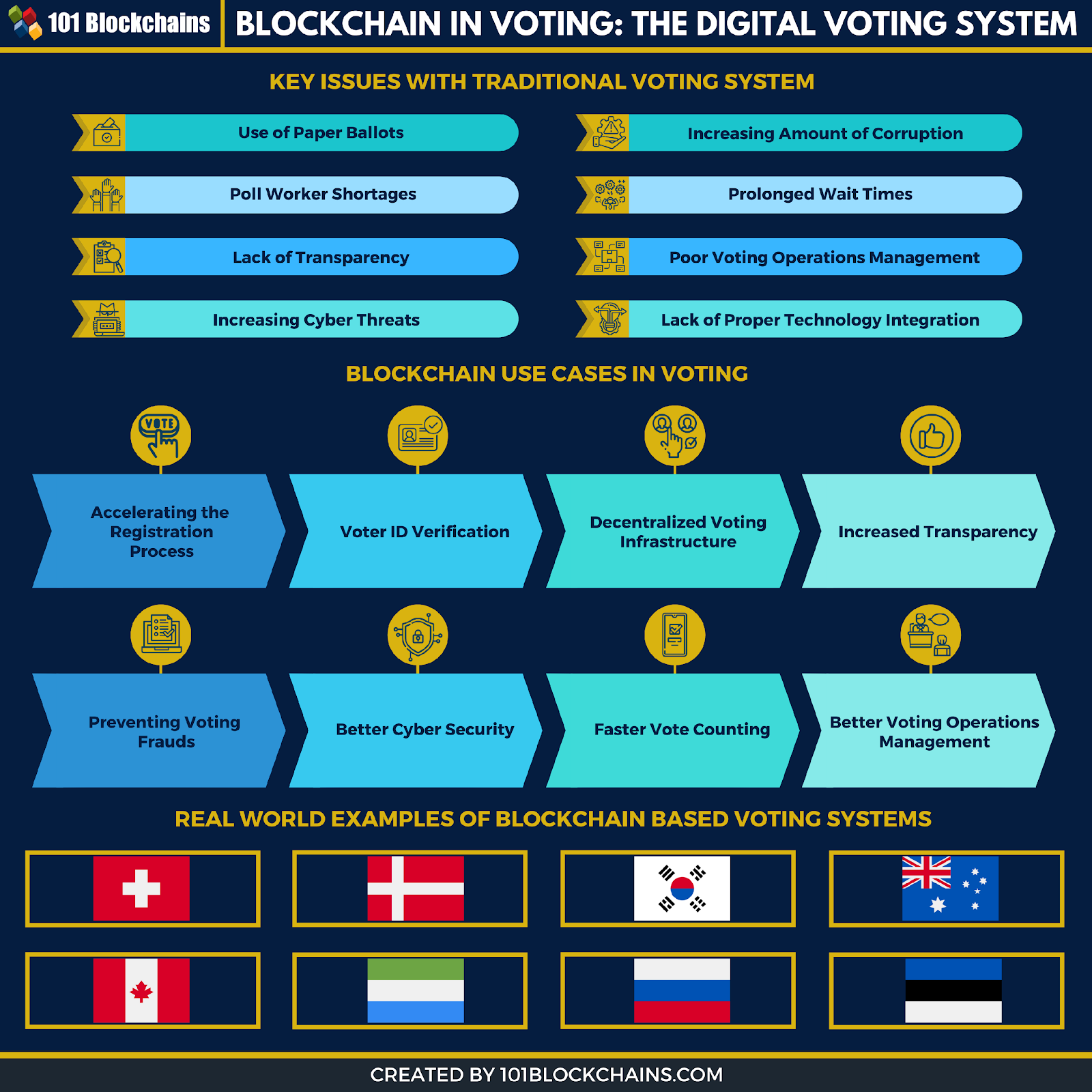 A common misconception among opponents of mobile voting, is the “lack of mobile device ownership.” However, a 2019 Pew Research Center study shows the opposite. “The vast majority of Americans – 96% – now own a cellphone of some kind. The share of Americans that own smartphones is now 81%, up from just 35% in Pew Research Center’s first survey of smartphone ownership conducted in 2011. Along with mobile phones, Americans own a range of other information devices. Nearly three-quarters of U.S. adults now own desktop or laptop computers, while roughly half now own tablet computers and roughly half own e-reader devices,” the survey concluded.

The process is simple. You would contact your town clerk for an electronic absentee ballot. The clerk would send a secured link to download the app, verify your identity, fill out the ballot in your district, and submit it. The app removes your identity from the vote, while giving you a receipt of your vote to print if you wish, and then giving the town clerk a completed ballot to add to their other ballots to tabulate, securely and efficiently. Engaging the youth vote would be much easier if a simple email to the town clerk, and less than 5 minutes on your phone would finish your voting experience, without leaving the couch.

As evidenced by other state’s work and success, high degrees of voting integrity and voter turnout and accessibility are possible. Our election integrity is at stake. Without it, Vermont has the likely future of being the next Florida “hanging chad” internet joke.