Following Secretary of State Jim Condos’ appearance on the WVMT radio show, Morning Drive, where he was confronted by a caller claiming to be a Middlebury landlord who witnessed students “scooping up” and fraudulently submitting unclaimed or unwanted mailed ballots in the last election, we have been asking the Secretary’s office for specific details regarding security measures, or lack thereof, in Vermont’s proposed vote-by-mail bill, S.15. So far, Eric Covey, spokesperson for the office, has been adamant that there is no fraud in Vermont, but evasive regarding specific questions about specific vulnerabilities in the system. 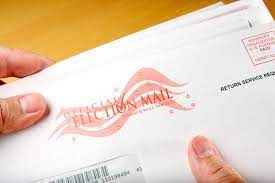 When asked about the caller from Middlebury, Covey dismissed the accusations, saying, “It is even going too far to call the remarks the caller made “allegations”. The caller still has not contacted our office, which is what the Secretary asked him to do, with information about what they said on air…. At this point, that claim is hearsay, or baseless conjecture at best.”

But, when asked if, hypothetically, such an incident did happen either in Middlebury or elsewhere, how would Vermont election officials detect the fraud, trace it back to its source, and prosecute the criminal(s), Covey did not respond.

Kurt Wright, the co-host of The Morning Drive radio show where the allegations arose, has expressed concerns about Vermont election integrity for decades. Wright, who served the Burlington community for years as City Council President, as a State Representative for eighteen years, and lost a bid for mayor due to the city’s since-repealed experiment with rank-choice voting, is intimately familiar with how elections work in practice.

“Just because we haven’t had proven fraud in Vermont, it doesn’t mean we shouldn’t take this very seriously,” said Wright, when interviewed by phone.

“I’ve been concerned about the process for a long time, I even wrote articles for the Burlington Free Press as far back as 1996 highlighting issues such as ballot harvesting. I think if we are going to have a permanent Vote-by-Mail system, we need to provide protections and safeguards as if the voters were voting in person. The sanctity of each vote should be paramount.

“Back in 2005, the bi-partisan Carter-Baker Commission on Federal Election Reform had dozens of recommendations to ensure the integrity and faith in American elections. Vermont has ignored them and continues to do so. Just like the Carter-Baker report, this should be a non-partisan issue.”

The commission Wright referenced was the result of the now famous 2000 election debacle in Florida culminating in a Supreme Court decision in favor George W. Bush. Jimmy Carter personally handed then President Bush the report upon completion 5 years later.

If S.15 passes into law, and it has already passed the State Senate 27-3, it would make voting by mail a permanent feature of Vermont elections, but with almost none of the security measures noted in the Carter/Baker report, nor the measures utilized by the 5 states that have already adopted Vote-by-Mail systems. The only security measure to be included is an amendment by Sen. Joe Benning, R-Caledonia, to prohibit political candidates and their paid staffers from collecting and returning absentee ballots from voters during a general election, commonly known as “ballot harvesting.” Unpaid campaign volunteers, however, are not included in that restriction, nor are political parties, PACs, lobbyists, unions, or any other special interest group, making the Benning Amendment almost totally ineffective at preventing the controversial practice.

How Other States Secure Mail-In Ballots

Here is what other states that have vote-by-mail programs do to maintain ballot integrity in their elections:

Oregon became the first state in the nation to conduct all statewide elections entirely by mail, in 1998. According at a 2018 news article by NBC, “In order to make sure voter rolls are up to date, Oregon election officials rigorously comb death notices, change of address forms, even track social security records. Ballots can be returned by mail, but the majority of marked ballots are returned via the state's hundreds of secure drop sites. According to election officials, younger voters say they don't like to use the post office. Once they've been collected and brought to one of 36 county election offices around the state, all ballots are checked for authenticity. Each signature is verified against voter registration cards. The authenticated ballots then go to the vote tallying room to be counted,” the report stated. For further security voters can ask for a text message confirming their ballot has been counted. They also use no scanning machines; all ballots are counted by hand.

Washington state also has signature verification for all mail-in ballots. In addition, ballots are removed from ballot boxes by teams of two people, ballots are processed and scanned but not tabulated until after polls are closed, each county’s tabulation system is “air-gapped” to prevent outside hacking, and ballot counts are checked before and after the results are uploaded to the Secretary of State’s office with new (previously unused) USB drives.

Colorado also has signature verification on all ballots. Candidates, political parties, and issue committees appoint election watchers to observe teams of bi-partisan judges to verify every single ballot envelope signature matches the one on file before opening the envelope. Ballots differ in style by county to make ballots difficult to replicate. Ballot scanners are never connected to the internet. A ballot tracking system allows voters to see when the state mails their ballot and when it is returned to verify no one else sent it on their behalf. Colorado also bans large-scale ballot harvesting as it is illegal for anyone to return more than ten ballots on behalf of voters other than themselves.

Utah’s vote by mail system has been operational since 2012. Individual counties can opt in or out of using blanket-mailed ballots. Envelope signatures are compared to the signatures on file to verify the identity of the voter. Utah also has an online tracking system for voters to check the status of their ballots. Voters listed as “inactive” are NOT mailed a ballot. When a county clerk receives information that a voter has relocated, they send a card requesting an update from the voter. If the voter does not respond, they are listed as “inactive.” In 2020, there were approximately 200,000 inactive voters who were not mailed a ballot. Election officials conduct audits of vote counts and signature verification before certifying results. Every ballot has a unique barcode which is scanned when received to prevent duplicate voting, and if a voter votes twice (mailed and in person for example), the second ballot cast is intentionally spoiled.

Hawaii was the latest state to go to a Vote-by-Mail system, in 2020. They mailed signature cards to every registered voter in April, and any ballot received in the election without a signature on file was not counted. Moving forward all ballots will be signature verified with the signatures returned in 2020. Local and statewide elections with a victory margin less than one hundred ballots or 0.25% (whichever is greater) are now required to have a recount.

California used expanded Vote by Mail systems due to the pandemic is 2020. The ballot envelopes have unique barcodes which allow for correct district sorting and online voter tracking. Ballot envelope signatures are verified against voter registration signatures by machines AND humans. Election officials constantly review vital records to purge voter rolls. Tabulation machines are not connected to the internet, and access is limited to a few staffers for increased accountability. Every county hand counts 1% of its ballots as a test. Some counties allow the public to observe ballot counting in action via public display windows in tabulation areas, and tabulation staff are never allowed to be alone with ballots.

Vermont vs. Everybody Else

So how does Vermont and the proposed S.15 shape up? As Secretary of State Jim Condos stated in the interview on WVMT, two important things came to light. Vermont does not have a signature verification process, nor does S.15 plan for one. Not only that, but Condos noted there are very few signatures on file to compare if needed. There are no plans to use other forms of voter ID, such as a requirement to include a photocopy of a drivers license or other such verification of identity. This means anybody can send in an absentee ballot for someone else if they are willing to falsely sign the ballot return envelope with practically zero chance of being caught.

Condos also noted it is very difficult to remove voters from the roles, taking multiple election cycles to remove voters who are no longer in the state. Voters have to request to be removed from the roles to order to be removed in a timely fashion under current regulation, which is usually the last thing on people’s mind when they move. This means ballots will routinely be sent to tens of thousands of people every cycle who are no longer eligible to vote. Vermont does have ballot voter tracking for absentee ballots however.

What S.15 proposes to do is to mail hundreds of thousands of live ballots across the state, without signature verification, voter ID (as the Carter-Baker commission recommended), without efficient voter roll monitoring, and absentee ballots are commingled with in person ballots once town clerks are satisfied the ballot envelope has been filled out correctly and the name on the envelope is a registered voter and has not voted in person. Put another way, if the person fraudulently mailing unused ballot has a reasonable assurance the person the ballot was intended for isn’t going to show up in person, and fills out the envelope correctly, the likelihood of being caught is very low. And, if fraud is alleged, it will be difficult to investigate after the fact, and, because Vermont would allow ballot processing of early votes 30 days prior to election day, any frauduelent duplicate voting that took place prior to the legitimate voters showing up at the polls triggering a red flag would still be counted (could not be removed) in the final vote tally.

Even with the record turn outs of 2020, voter apathy is extremely high. Americans are one of the least active voting populations among developed countries, with the U.S. coming in at 31 out of 35 countries in voter turnout. In a 2019 Gallup World Poll, 59% of Americans said they were not confident in the honesty of the election process, which was an improvement from 2016’s poll which showed 69% of Americans did not have confidence in the honesty of the process. To put this into perspective, only two other countries in the poll had less confidence in their election process, Chile, and Mexico. In 2006, more votes were cast for American Idol contestants than any president had received in American history to date. A recent non-partisan poll says 72% of Americans support requiring all voters to provide photo identification in order to vote, including a majority of Democrats. The breakdown of those in favor were 56% of Democrats, 72% of Independents, and 91% of Republicans. As the Carter-Baker commission report stated, even the perception of the likelihood of fraud will cause Americans to lose faith and engagement in our most sacred of democratic institutions, and their recommendations still ring true as well.