Vermont scored the worst of all 50 states in providing a legislative check on the governor’s emergency powers, in Scoring Emergency Executive Power In All 50 States, a new study from the Maine Policy Institute. 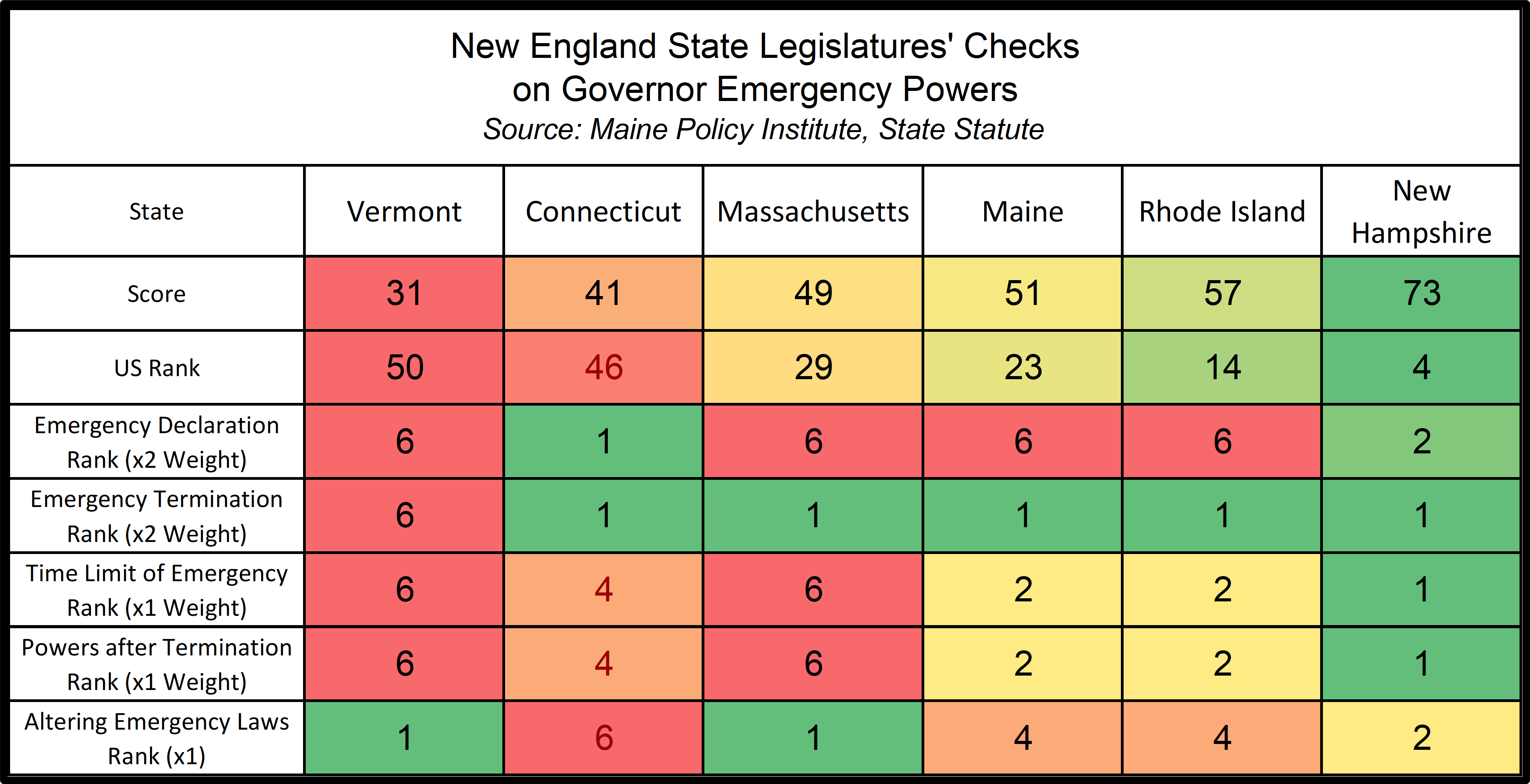 Vermont’s Legislature has little legal authority to challenge any emergency edict from our governor, given the wide scope in Vermont law which condones the any governor’s actions in declaring and continuing a state of emergency.

How did Maine Policy conduct the study? “Every state received a numerical score between 1 and 20 across five categories for a total score of up to 100 points. The highest score denotes the most stringent executive powers, allowing for the greatest accountability from the people’s branch, the legislature. The lowest score denotes the weakest check on executive powers and the greatest potential threat to liberty.”

There is a wide range in the “time limits” New England states have set on their State of Emergency declarations. New Hampshire has the strictest declaration: every 21 days, the emergency must be renewed. Maine and Rhode Island set out a time limit of 30 days, and Connecticut stipulates 60 days. Only Massachusetts and Vermont have no time limit on a State of Emergency.

The only category that Vermont scores higher in is the “authority to alter statutes or regulations” during a State of Emergency. Only Mass. and Vermont do not give the governor such authority. New Hampshire is nearly as strict: the NH governor “may amend or create new regulations but cannot modify or remove statute.” Connecticut, Maine and Rhode all allow the governor to suspend any statute or regulation related to the emergency.

Vermont scores abysmally on the governor’s powers continuing post-emergency. Massachusetts, New Hampshire and Rhode Island immediately remove any such powers from the governor after the State of Emergency is lifted. Maine gives their governor 30 days to use executive powers during the Covid-19 emergency. Connecticut and Vermont score lowest of the New England states, giving their governor 6 months to keep using emergency powers.

The final 2 categories deal with the authority of the most powerful person in government, and their power to begin and end emergencies without input from the legislative branch of government. Maine Policy weighted these categories twice as heavily, because “the primary focus of this report is the checks and balances on emergency executive authority.”

Vermont joins 3 other New England states in giving the governor the sole responsibility for declaring a “State of Emergency:” Maine, Mass., and Rhode Island. A Connecticut Senate/House legislative joint committee may "disapprove and nullify" a governor’s emergency order within 3 days, while New Hampshire gives both the legislature and governor the power to declare an emergency.

In every single other New England state, a joint resolution passed by the House and Senate will terminate a State of Emergency. Vermont stands alone in giving the governor the sole authority to terminate an emergency.

It makes sense why these final two categories are weighted twice as heavily: Governor Scott has the authority to declare an emergency at any time he pleases and end it whenever he pleases. Time limits, the suspensions of laws during an emergency and even the governor’s powers that continue ‘after a State of Emergency has ended’ are all icing on cake.

No doubt the citizens of other states are more aware of interplay of emergency powers between the governor and Legislature. Governor Scott and the Vermont Legislature have been in near lockstep, at least on Vermont’s State of Emergency, for all of 2020. Only small number of Vermonters have protested how the legislature and governor have handled the emergency.

This makes it a perfect, non-political time to reform Vermont statute, and decentralize emergency power from the governor to the governor and the legislature. Future generations of Vermonters may thank us.

To read Vermont’s State of Emergency laws, click here. Scoring Emergency Executive Power In All 50 States in its entirety can be viewed here.