Since the Transportation Climate Initiative (TCI) emerged as a serious policy proposal, the most eager proponent of the 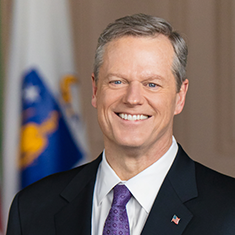 multi-state Carbon Tax on motor fuels has been Massachusetts Governor Charlie Baker. Even as New Hampshire Governor Chris Sununu called the scheme to raise prices on gasoline and diesel fuels by up to 17 cents per gallon (a de facto tax on New England and Mid-Atlantic state drivers of $5.6 billion annually) “… a financial boondoggle and the people of New Hampshire will never support it,” and other governors mumbled, shuffled, and stared at their toes about it, Baker remained stalwart. Until this week.

According to the Boston Herald, “Gov. Charlie Baker said governors are re-evaluating support of a controversial carbon tax designed to limit greenhouse gas emissions as advocates renew calls for its passage.” He further acknowledged that, “We’re living at a point in time right now that’s dramatically different than the point in time we were living in when people’s expectations about miles traveled and all the rest were a lot different.”

It’s finally dawning on Baker that the cost/benefits of the program no longer make sense. In our opinion they never did, but certainly not in the wake of the Covid economic downturn. The costs to businesses and families trying to rebuild their financial foundations are totally unjustified, especially given the reality that TCI will have a negligible impact on regional greenhouse gas emissions and zero impact on global climate trends. It’s an all-cost/no benefit tax scheme, except for the people getting rich running the “carbon credit” market and a handful of special interests that will get privileged access to subsidies out of the TCI cookie jar.

Last month, the Ethan Allen Institute commissioned a scientific poll asking Vermonters what they thought about TCI. A solid majority opposes adding a tax/fee/surcharge to gasoline and diesel prices, and that majority increases when they learn that TCI will have at best a meager 1%-6% impact on reducing greenhouse gas emissions. (See full results HERE.)

If Charlie Baker sees the writing on the wall for TCI, perhaps it’s time we all did.