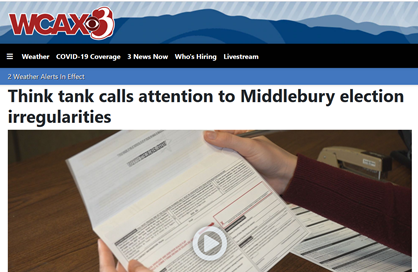 Policy analyst David Flemming was interviewed by WCAX this week, in a segment featured on Wednesday’s 6 o’clock news. EAI had recently released research suggesting that 10 Middlebury absentee ballots from the 2020 election were submitted by individuals from out of state, either by those individuals who when they no longer residents of Vermont, or who by other individuals living at those addresses.

Using Middlebury’s list of graduating students from 2015-19, a list of all Middlebury citizens who voted in the 2020 election, and graduate LinkedIn profiles, the Ethan Allen Institute identified 10 individuals who had long since left Vermont but were recorded as having voted in 2020.

These votes are not enough to call into question the legitimacy of Middlebury’s 2020 House race. But given the slim margins of some recent Vermont elections, shoddy lists place future elections across the state in peril.

The Ethan Allen Institute is providing the names of these 10 individuals to Vermont’s Secretary of State, Attorney General and Middlebury’s town clerks, and asking them to be on the lookout for other irregularities across the state.

EAI analyst and project organizer David Flemming said, “We believe Vermont’s electoral security lapses are manageable problems, if steps are taken to address them now. We hope our fellow Vermonters will also reach out to our officials as well and let them know how important electoral integrity is to them. We hope that Middlebury’s, and Vermont’s, voter rolls will be cleaned up in time for the 2022 election, with absentee ballots being sent out in less than 6 months.”