Seven Days had a fascinating cover story this week: “For Vermonters and out-of-state visitors, the requirement to quarantine (for 14 days) when traveling to the Green Mountains from elsewhere in the Northeast is governed by a county-by-county map that changes weekly, according to case rates. Quarantine counties are depicted in red or yellow, non-quarantine counties in green 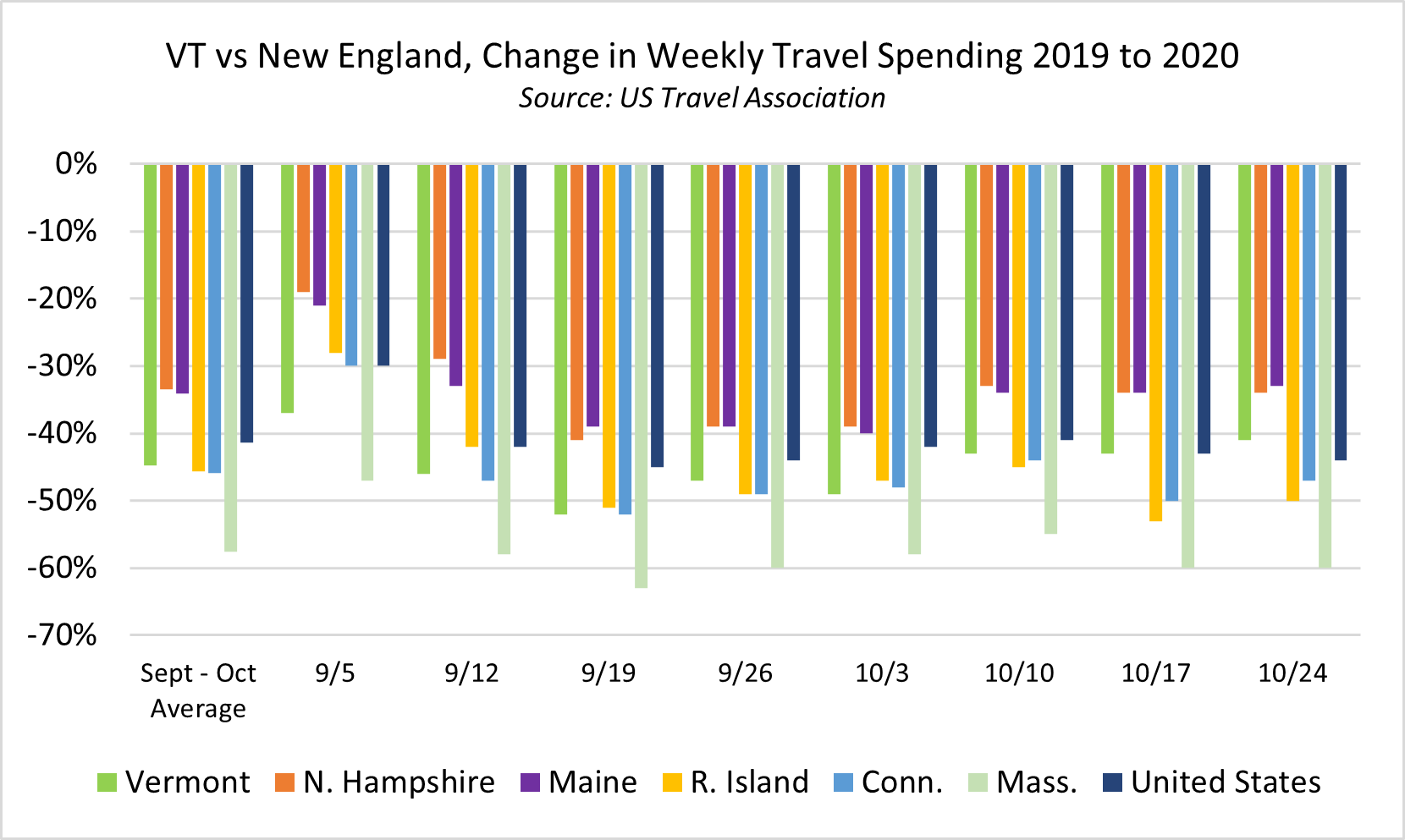 These restrictions are the most stringent in the country — by a mile…. a lean summer season led some in the hospitality industry to grumble that Vermont was losing tourists to other New England states…. The threshold is nearly twice as strict as those used in some other states in the Northeast, he acknowledged. The implications are dramatic. Massachusetts' travel restrictions kick in for states with an average of 10 or more daily cases per 100,000 residents. As of November 3, more than 72 million Americans could freely travel to Vermont's southern neighbor; only 331,000 from six rural counties could travel to Vermont.”

While this discrepancy is striking, can we find evidence that Vermont is losing more tourism dollars than our New England neighbors? According to the US Travel Association, individuals traveling to Vermont have spent $192 million less in September and October 2020 than in September and October 2019, but other New England states with a higher population have lost more. By putting these amounts in a percentage terms, we can gain a better understanding for the worst-suffering states.

The US Travel study looked at the change in travel spending from a week in 2020 compared to that same week in 2019. And indeed, for the weeks of September 5 and October 3, Vermont had the 2nd largest decrease (among 6 states) in travel spending from the year before. But for every one of the other 6 weeks, we only had the 3rd or 4th largest decrease, right in the middle of the New England pack.

For those 8 weeks, Vermont, Connecticut, and Rhode Island have each experienced an average 45-46% decrease (relative to the corresponding week form 2019). This was a little worse than Maine and New Hampshire, each with a 34% average decrease. Massachusetts’ 58% average decrease was the largest of the group.

While the travel restrictions are likely restricting the supply of travelers into Vermont, it has not, so far, made Vermont uncompetitive with our New England neighbors. That being said, New England as a whole is seeing greater declines in tourism relative to the rest of the US: while Vermont recently had lower decreases than the US for Oct. 17-Oct. 31, we had higher decreases from Sept. 5- Oct. 16

So how do these lost tourism dollars fit into the big picture of the state as a whole? In New England, only Maine and Vermont had a tourism share of GDP of 6% of their economies in 2018. Massachusetts (4%), Connecticut (3%), and Rhode Island (5%), New Hampshire (5%) are all less reliant on tourism.

You can read the Seven Days article here.