At the January 14 meeting of the Senate Government Operations Committee, Senator Brian 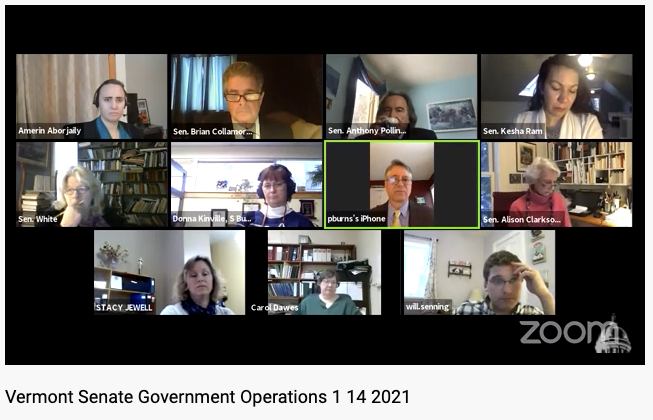 Collamore (R-Rutland) asked Vermont Director of Elections, Will Senning, about a woman arrested for election fraud in Texas. The story in question involved on Raquel Rodriquez who was caught engaging in "election fraud, illegal voting, unlawfully assisting people voting by mail and unlawfully possessing an official ballot.” Collamore wanted to know if similar actions, if they occurred in Vermont, could be detected and prosecuted.

For a specific example, the senator asked, “If I were to have filled out my wife’s ballot, and/or my son’s, which arrived without them asking for it… what security measures are in place now whereby we could even know that, let alone remedied it, and prosecuted me, quite frankly.”

Senning responded (watch the video at the 1:49:00 mark), “It’s 100% a fair question, Senator Collamore, and if you were willing to forge the signature of your wife and/or your son – so you fill out their ballot for them, put it in that certificate envelope, and sign their name for them in some kind of manner that you plan will not be noticed by your town clerk as looking too much like your signature… it’s likely that that ballot will get processed and that your wife and/or son would be checked off the checklist as having voted at that point. The most significant check there… is then if your wife or son showed up to vote on election day, their name would be checked off the check list because the clerks are very diligent about keeping track of who they’ve received a ballot back from. That’s where questions would start to be raised and the issue would start to be looked into at that point. We had instances of that this year…. But it’s really that one ballot for one voter that brings that to light at the time of the election. You can’t get the vote back, but you can at least potentially go and prosecute the person for voting on another person’s ballot.”

This is problematic on so many levels.

These huge gaps in security only address one example of potential fraud. The other things that the woman from Texas engaged in – bribing someone to vote a certain way, “unlawfully assisting” people to vote, etc. – could not be detected, remedied, and prosecuted either. How can we have faith in election outcomes when this is the case?