Commentary: Vermont, the Only State Seeing No Need for Election Safeguards 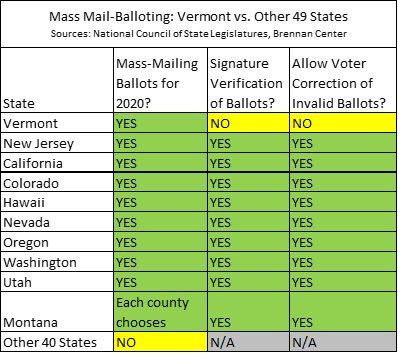 By avoiding best practices in a vote-by-mail effort practiced in other states, our Secretary of State Jim Condos is opening Vermont up to questions of electoral fraud.

On The Morning Drive radio show three weeks ago, Secretary of State Jim Condos discussed his decision to mail a ballot to all addresses on the voter checklist. “We had two important principles that we were following. One, we had to preserve every Vermonter’s right to vote. Two, we had to respect the health and safety of not just the voters, but also the town clerks and poll workers.”

A caller asked Condos, “(In order) to police voter fraud on the mail-in ballots, do you have people’s signatures on record so that you can see if it’s them actually voting?”

Condos responded, “We are not a signature verification state. We don’t have signatures on file. We would have to get almost half a million signatures from people. And signatures are not always the end-all. There’s a lot of defective ballots because people’s signatures change over time.”

Vermont is one of only 10 states which has decided to mail ballots to all addresses on file, according to the National Council of State Legislatures. Of the 10 states with mass mail balloting, Hawaii, Oregon, Washington, Colorado and Utah have spent years fine-tuning the process. Vermont joins New Jersey, California, Montana (county basis) and Nevada as the 5 states scrambling to create a system for mass mailing ballots this year.

But the four other first-time mailing states joined the five early-adopting states in requiring a signature on a ballot to be matched to a signature on file. These 9 also give mail voters the chance to correct their ballot if they followed the balloting instructions incorrectly. Vermont stands alone among the 10 states in not using both the signature verification and correction safeguards. Nothing prevents Vermonters with knowledge of voters moving or dying from collecting those ballots and voting in their place.

Yes, obtaining “almost half a million signatures from people” is a task, but it is one that should have been explored. The 40 states which did not go the mass mail-balloting route recognized the sizeable task and chose to forgo mass balloting, ensuring the integrity of their states’ electoral systems. And the other 9 mass-balloting states recognized the importance of collecting signatures. If California, with a population 62 times larger than Vermont, and Covid case rate 7x higher than Vermont, was able to collect signatures for mass balloting, why couldn’t Condos have at least done a cost-benefit analysis of signature matching? It could have been as simple as starting with what other states have done- harvesting signatures from the state DMV, hardly impairing the safety of our “town clerks and poll workers.”

Condos insists that Vermont’s signature-less system will triumph because the signature-matching alternative is “a lot of defective ballots (due to when) people’s signatures change over time.” If true, this statement would call into question the 60+ million votes in the 9 mass-balloting states. Luckily (or unluckily for Vermont), his statement is suspect.

Yes, some signatures were flagged in the 2018 US midterm elections, but the correcting mechanism works well. Only 0.2% of submitted 2018 mail ballots were rejected for a mismatched signature. This is in contrast to the over 6000 Vermonters (over 3% of total voters) in the recent primary who were disenfranchised because they couldn’t correct their ballot.

Perhaps in times past, we could rely on our Secretary of State to faithfully execute the electoral duties of the office. And perhaps Jim Condos has done nothing wrong within the considerably lenient bounds of Vermont law.

But Americans in all 50 states have begun to lose faith that our elections give everyone a fair shot at winning. Vermont’s elections cannot be just ‘good enough’ to pass legal muster. They must have enough integrity that voters of all demographics, ideologies and party affiliations will graciously accept the election results, without thinking ‘there may be something else going on’ when they hear that candidate X or Y lost.

This is why Vermont should consider removing our Secretary of State from overseeing elections, and transfer authority to a bipartisan commission. Nine states, including Maryland, New York and Virginia already do so. Vermont should follow suit. The integrity of our electoral process cannot depend on one individual.