The Tax Foundation released its annual State Business Climate rankings for 2022 on Thursday. Overall, Vermont scored 2nd worst in New England at #43, behind only Connecticut at #47.

The Individual Income Tax ranking was 2nd highest in New England, behind only Connecticut, at #47. It gets a 31.2% weight in the overall score. This ranking looks at such items as the top marginal tax rate, the number of brackets, income recapture and double taxation of capital income.

Our Sales Tax rank was in the middle of the pack, 16th highest in the country, and lower than Connecticut and Rhode Island, but higher than Massachusetts, Maine and New Hampshire, which doesn’t have any sales tax. This accounts for 23.7% of the overall score. While the rank is based on the overall tax rank, local sales tax rates, remote seller protections, sales tax breadth and excise taxes are all included in the sales tax rank score. 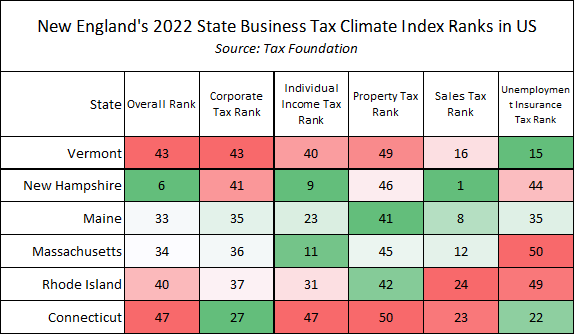 One silver lining: Vermont taxes unemployment insurance at a lower rate than any of our New England neighbors, and 15th lowest in the country.  Unfortunately, this ranking only gets a 9.8% ranking in the overall score. Which makes sense, because potential movers are more likely to compare income taxes, rather than insurance taxes before they move.

For each of the past 8 years, Vermont has barely budged in the rankings, ranking #42 in 4 years and #43 in 4 of the years. As Vermont’s ARPA funds dry up, it will become even more important to make Vermont friendlier to business. Relying on federal funding is a very risky long-term play for the economy.

David Flemming is a policy analyst at the Ethan Allen Institute