Vermont ranked 41st out of 50 states, when it comes to taxpayers' return on investment (ROI). What Vermont taxpayers pay to Montpelier doesn’t get a great return relative to what taxpayers from most other states get.

WalletHub commissioned Dr. John Kovari and William Kusterman to conduct the study "2021’s States with the Best & Worst Taxpayer ROI.” They ranked our nemesis New Hampshire, #1 out of all 50 states in taxpayers’ ROI, a state that doesn’t pay any income taxes.

Vermont actually did pretty well in Overall Government Services, ranking 2nd in Education, 6th in Safety, 6th again in Infrastructure and pollution, 7th in Health, but only 36th in Economy. Overall, not bad, if you ignore the price tag.

But paying the 3rd most taxes per capita in the country really sunk our score. Only Hawaii and North Dakota tax their citizens more. 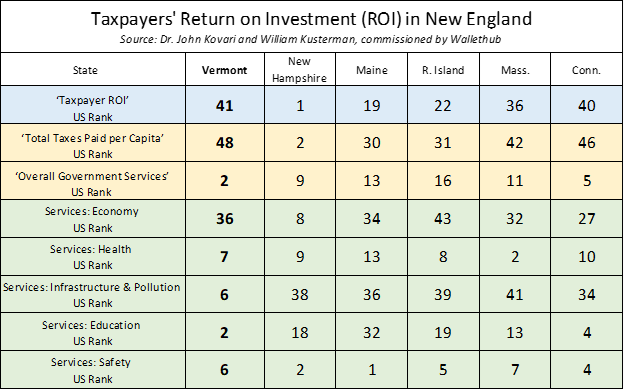