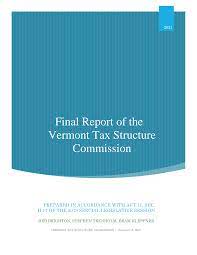 The Vermont Tax Structure Commission’s Final Report to the legislature recommended the expansion of “the sales tax base to all consumer-level purchases of goods and services except healthcare and casual consumer-to-consumer transactions” (Report, page 7).  Further, the Commission recommend that the legislature “use the gain from broadening the base to protect low-income Vermonters and reduce the sales tax rate to 3.6%” (Page 7).  Put simply, Vermont can’t afford this.

There are four reasons why this is a bad recommendation.  First, if you believe this broader-based tax rate would be lowered to the Commission’s “revenue-neutral scenario” rate of 3.6% that holds “low-income Vermonters harmless,” I have a bridge to sell you.  Heck, since it’s Vermont, I’ll make it a covered bridge.

Buried in that 3.6% rate is the second reason why this is a bad recommendation.  Keeping the expansion “revenue neutral” somehow costs $24 million (Page 78).  So non low-income Vermonters get the privilege of forking over an additional $24 million so that the state can reap not one single extra dollar.  And the administrative cost to protect low-income Vermonters?  A mere $14 million (Page 78).

Reason three concerns the cost to businesses, particularly small businesses.  Landscapers, painters, plumbers, electricians, roofers, bankers, appliance repairmen—all would be charged with accounting for and remitting to the state that 3.6% tax on everything they bill.  The Commission claims there is software that can easily take care of the accounting, but that is software that has to be purchased and learned, and then there is the time for all the data entry.  That is time each individual is not engaged in work that puts food on their table.

The fourth reason is the cost to non low-income Vermonters.  Every service they use, and most goods they purchase, will cost more.  Groceries?  Included.  You thought college was already expensive?  The state wants to tax tuition.  Is it tax time?  If you use an accountant to prepare your taxes, the state will charge you to have that return prepared.  Did a loved one die?  The state will have its hand out when you pay for the funeral services.  And aren’t we told that affordable childcare is currently a problem?  Well, the state wants to make it more expensive and tax that, too.

Here’s an alternative recommendation to the legislature.  Instead of protecting low-income Vermonters by raising everyone’s taxes and establishing a new program to rebate funds back to Vermont’s most vulnerable, how about spending less and lowering everyone’s taxes?  That may not be a revenue-neutral proposal, but it won’t cost taxpayers a dime to implement.