Vermont at “High” Risk of Gerrymandering

Vermont is at a “high risk” of having its redistricting process fall prey to partisanship, below only “extreme risk.” RepresentUs, a activist group with a decidedly progressively flavored website, notes “High-threat states are ripe for rigged maps, but may see minor protections in their current political landscape, basic transparency requirements, or simple legal standards for mapmakers. With few exceptions, current politicians control the redistricting."

To the first question “Can politicians control how election maps are drawn?” Vermont receives a “High Risk” designation. “The Vermont legislature approves plans by majority vote, subject to gubernatorial veto. Vetoes can be overridden with a 2/3 vote in each chamber. The apportionment board sends maps to the legislature, and is made up of 2 Democrats, 2 Republicans, and 2 members of the Progressive Party. The chief justice of the Vermont Supreme Court appoints the last member. The legislature can pass, change, or reject the board’s maps.” States like Michigan have an independent commission to determine their map, rather than legislators or partisan figures.

For the second question “Can election maps be drawn in secret?” Vermont is also at “High Risk” because “Public hearings are not required.” To bring a little of what is done in the dark into light, state statute requires plans to be “available for public inspection.” 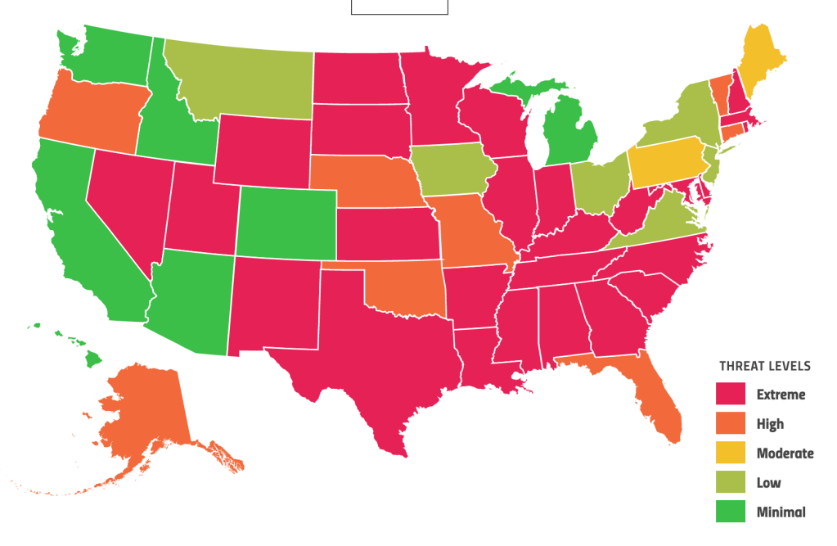 For the third question “Can election maps be rigged for partisan gain?” Vermont is only at “Moderate Risk.” “No party has enough control of the legislature to control the process, giving the governor meaningful veto authority. The inclusion of a third party on the board does limit partisan abuse by giving them equal power to the two major parties. However, these safeguards depend on divided political control, and could be eliminated in the future depending on legislative makeup.” Vermont’s Progressive Party holds the keys to Vermont’s redistricting in many ways.

Vermont is also at “Moderate Risk” in response to the question “Are the legal standards weak?” Vermont statute only stipulates that “districts must be: 1. compact; 2. in one piece; 3. in-line with political boundaries; 4. considerate of communities of interest." Therefore, RepresentUs says "maps can also consider incumbency. These weak standards leave the process open to partisan bias… a lack of prohibition of unfair practices, makes the reapportionment open to partisan or unfair plans.”

Vermont likely would have received the “Extreme” designation that 27 states did, but the fifth question “Are rigged election maps hard to challenge in court?” was deemed a “Low Risk.” The only thing excellent about our redistricting process is that “any group of five citizens can challenge maps in the Vermont Supreme Court within 30 days.”

These designations should not be taken as the chance of Vermont’s historical record or the cunning pf a state’s politicians. Only the legal process for determining legislative is considered. Regardless, Vermont has a long way to go before we can be considered a “low risk” of gerrymandering.

Credit to John Walters for referencing the study.