Seven Days recently ran an article asking, “Has Phil Scott Made Vermont More Affordable.” The story cites the Institute on Taxation and Economic Policy which notes that Vermont has “one of the most progressive, or equitable, tax systems in the country.” 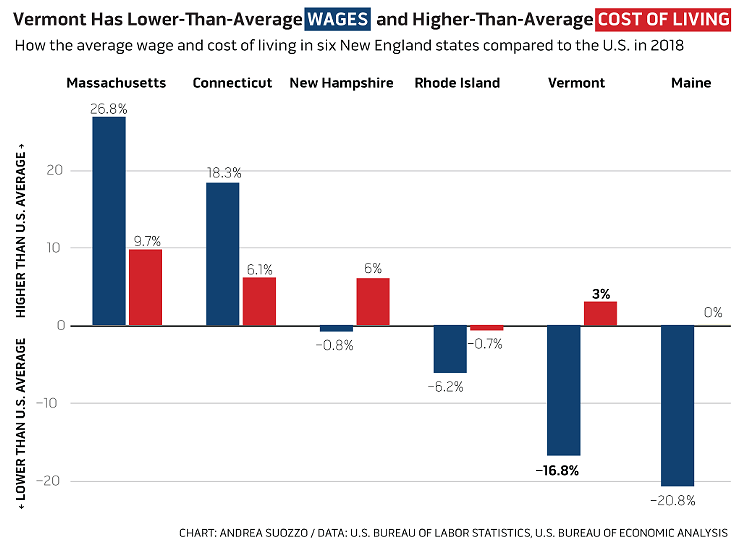 However, “At the same time, according to the U.S. Bureau of Labor Statistics, wages in [Vermont] were nearly 17 percent lower than the national average." New Hampshire’s wages, to keep the comparison, were just 0.8 percent lower than the national average and its rate of GDP growth was nearly twice that of Vermont at 2.2 percent vs. 1.2 percent respectively.

In other words, Vermont’s high, so-called-progressive tax structure comes with significantly lower wages and a less vibrant economy – and this is what’s at the root of Vermont’s affordability problem.

“Trickle down” is the derogatory term for policies that advocate for lower taxes as a spark for economic growth, which, in turn, create higher wages and standards of living. If the statistics cited by Seven Days are accurate, they bolster the argument that Trickle Down works, and the opposite -- high taxes and government redistribution of wealth -- does not.

Although there are many factors that contribute to these outcomes beyond tax policy, high taxes certainly contribute to Vermont’s high cost of living (the price of high taxes being factored into the cost of goods and services), and the drag on overall economic activity leads to fewer opportunities and lower wages. A vicious circle.

Unfortunately, reading between the lines of the Seven Days story one gets the message that their answer is more taxes and more government redistribution of wealth though programs like mandatory paid family leave (a new payroll tax), subsidized childcare (higher property taxes), and an even higher minimum wage (which is a de facto tax on labor). All policies that will exacerbate the death spiral Vermont’s economy is already in.

If “progressive” tax policies worked to raise standards of living Vermont would be an economic powerhouse. We are not. Instead of Trickle Down, we're Bleeding Out.