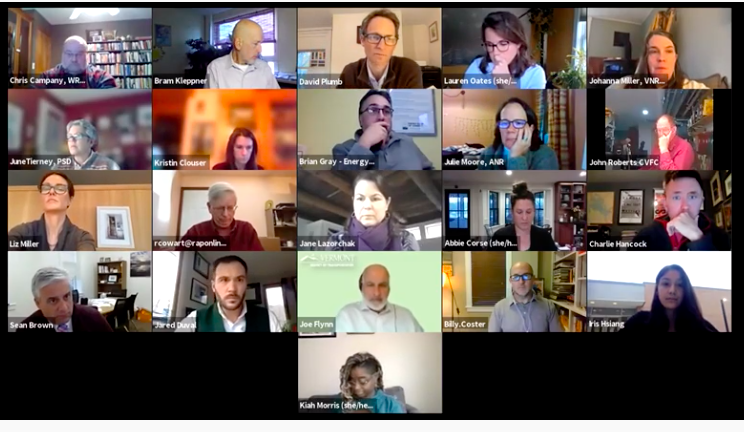 Global Warming Solutions Act. Period. That’s all. They are not concerned with the fallout – economic and otherwise – that will occur if we do all the things necessary to meet that goal. This sad fact was on full display during the Cross Sector Mitigation Subcommittee meeting on November 4.

One big unintended – though not unforeseeable – consequence of pushing Vermonters into electric vehicles (over 40,000 by 2025) will be a loss of gas tax revenue, which we use to pay for our road and bridge maintenance. So, what’s the plan to make up that revenue? Not our job, says the Council. Maybe not, but somebody better have an answer before we start buying people Priuses with the taxpayer money that used to be used to maintain the roads those Priuses still have to drive on.

Another unintended consequence has to do with Vermont’s labor force. The Climate Action Plan will require the state to weatherize 90,000 homes between now and the end of the decade, a task that Council members are quick to point out needs to take place in conjunction with other mandated home changes, such as the installation of 200,000 electric heat pumps.

This is likely to be logistically impossible. As Christine Donovan notes (56:00), “Any number that’s in the scale that we’ve been discussing today or previously is going to continue to be of grave concern for people who right now are directly involved with the delivery of weatherization work, and are challenged to see a pathway where we could actually deliver this scale of weatherization and have a prepared workforce capable of delivering that…. I don’t think any of us know how we’ll solve that problem….”

Donovan’s remarks were shrugged off. Not our problem! If that’s the number that gets us to our mandated goal, that’s the number we’re putting forward in the plan whether or not it has any basis in reality. If the legislature cares to take logistical realities into account, they can come up with another plan.

But what the Council did not consider at all is what impact this proposal would have on the private sector labor supply for things such as building new housing stock, or ordinary home maintenance such as repairing roofs, fixing frozen pipes, unclogging plumbing, etc. What happens when the government conscripts our entire force of skilled labor for such projects into its monomaniacal war on fossil fuel use. It’s hard enough to get a plumber, and electrician or a carpenter as it is. What are you going to do when the government has them all working non-stop installing heat pumps nobody wants and EV charging stations for cars that don’t exist?