There was more testimony in the virtual State House this week about the recent election, this time in the House Government Operations Committee, from several Town Clerks. Though the bulk of their comments were positive, a number of clear and present dangers regarding mail 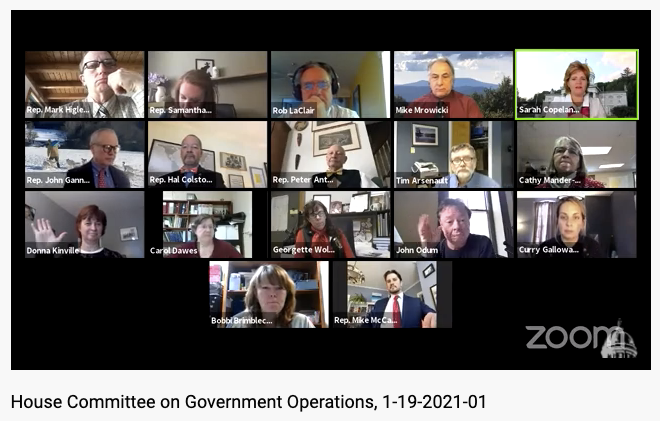 in voting and fraud were exposed in the questioning.

As Director of Elections Will Senning testified a day earlier in the Senate Committee, the Clerks confirmed that the only real way to detect fraud in our current system is if, when a ballot is illegally cast through the mail, the real voter shows up at the polls and contests their status as having already voted. However, when asked what happens if someone illegally casts a ballot for a non-voter (someone who has moved away or is just apathetic), Montpelier Town Clerk John Odum had to admit, “I mean, the short answer to the question is no, we can't necessarily stop them.”

Town Clerk for Marshfield, Bobbi Brimblecomb, pointed out, this isn’t just a problem with unsolicited absentee ballots, “If someone was determined to do that type of fraud there's nothing now stopping them from requesting an absentee ballot on behalf of that voter, and doing it at home.”

A point further confirmed by Barre City Clerk Carol Dawes, “There isn't any way in our current system that would that would preclude somebody making a request and then voting on behalf of someone who doesn't want to vote on that. Is it, you know, as we've talked about whether you're mailing ballots out to people or whether you're mailing them upon request. That is an opportunity that's out there.”

This is, of course, especially a problem when you mail live ballots to everyone on the voter checklist even if they didn’t request a ballot – anyone can get hold of a ballot for a non-voter (35% of the people on the checklist in a high-turn out year), fill it out, have that vote counted, and, again to quote Clerk Odum, “we can’t necessarily stop them.”

Dawes went on to say that she “hoped” that, that the number of people who cast fraudulent votes in this manner are small, and “believes” that it is. But, and this is the critical point, she – nor we – has no way of actually knowing what those numbers really are. They could be small; they could be huge. We don’t know, and the system does not allow us to know.

While in some tiny communities where the clerk “knows everybody” this may not be a major issue, but, as Dawes testified, in her district 64% of the housing stock is rental properties and there is a large transient population. Donna Kinville, Town Clerk in South Burlington, noted that there’s no way she can know everyone, and that in her district alone 2000 live ballots came back as “undeliverable” for the November election. What is the situation in college towns where students register for one election and then leave after graduation?

Other major problems came to light as well. Kinville complained, “We don't get a lot of election fraud training. How to detect it…. How do you find fraud. How do you investigate it?” If the clerks and election officials aren’t trained in how to recognize fraud, how are they supposed to defend against it?

Perhaps more disturbing, multiple Clerks complained that when fraud or potential fraud is detected, neither the Secretary of State’s office nor the Attorney General’s office does anything about it. Brimblecomb testified, “When we do report something. It needs to be followed up on.” She relayed a story about catching a non-resident attempting to vote. “I reported it, nothing was ever done.”

Kinville had a similar story. “I have two instances where I confirmed with other towns where they [bad voters] actually did vote in both [towns], but I was able to catch the second ballot from going through and put it aside and that's it. It's up to the Secretary of State's office if they want to prosecute further on that. They said they’ll let me know what happens. And honestly, I haven't heard anything else.”

As for “same day” registration, Kinville, related, “After people registered vote on election day, I send them all a notice and welcome to the city and you're a new voter. And there have been some presidential elections that I'll get 15 to 20 of them back. [The person is] not at this address. Now it could be the post office not wanting to deliver, or it could be the fact that no one really truly lives there.” Why don’t we know this? The Secretary of State said repeatedly leading up to election day that if there were instances of fraud they would be investigated. This is apparently not true.

So, just to recap, these Town Clerks revealed that we have an election system that cannot reliably protect against fraudulent mail in ballots, is run by officials who receive little to no training in how to detect fraudulent votes, and, when fraud or potential fraud is flagged, it is ignored by the Secretary of State’s office and/or the Attorney General’s office who, at the same time, tell us vote fraud isn’t a thing. And we’re supposed to have confidence in this system, why?

* Correction. An earlier version of this story referred to Carol Dawes as Barre Town Clerk, but she is Barre City Town Clerk. Thanks to a reader for pointing out the error!