For the past two years, how many times have we had to hear from Global Warming Solutions Act (GWSA) advocates that Vermont’s 2005 goals to reduce greenhouse gas emissions “lack teeth,” and this dentally challenged nature of our policies is why Vermont has consistently failed to meet those goals. We need big, sharp, serious teeth! And those teeth were going to be the citizen lawsuit provision of the GWSA. This allows that if Vermont isn’t on track to meet the targets in the law, “any person” can sue the state at taxpayers’ expense. 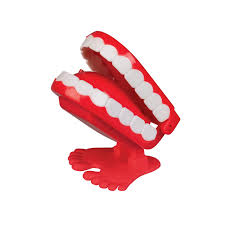 “Rep. Tim Briglin, D-Thetford [and Chair of the committee that reported the bill], said the bill aims to give the state’s aspirational goals on greenhouse gas emissions more TEETH (emphasis added) …” (VTDigger, 4/11/19)

“The bill mandates greenhouse gas emissions reductions, starting with a 26 percent reduction by 2025, and provides TEETH (emphasis added) for those requirements by allowing Vermonters to sue the state for failure to meet standards.” (Brattleboro Reformer, 9/14/2020)

“And that’s important because right now there are targets in the schedule but nothing happens if we don’t meet them,” [Chris Granda of the Richmond Climate Action Committee] said. “And Vermont’s greenhouse gases have actually been going in the wrong direction. So this would put some TEETH (emphasis added) into that.” (WCAX, 10/2/19)

So, now that the GWSA is the law of the land following an override of Phil Scott veto orchestrated by, among others, the Speaker of the House Mitzi Johnson (D-Grand Isle), you’d think she’d be bragging up and down about the shiny, scary, sharp dentures she and her colleagues just installed.

Responding to criticism in her hometown newspaper about the GWSA, including the potential costliness of the citizen lawsuit provision of the law (you remember, the ‘teeth”), Johnson had this to say:

“It [the GWSA] NARROWS, NOT EXPANDS, a right to sue: Citizens and groups can already sue the state. This bill removes the ability to sue for damages (emphasis added). It allows people to hold their government accountable in the courts. And there is no basis for a lawsuit if the state holds to the basic standards.” (Vermont Daily, 10/6/20)

So, let’s get this straight, Madam Speaker…. You’re saying the right to sue – the teeth you all said we so desperately needed – was always there, even without the GWSA. But now that you’ve gone through all this hoopla of passing the law over a veto, no less, the power behind those teeth has actually been diminished – narrowed, not expanded.

If this is really the case, you’re admitting you didn’t create teeth, you pulled them! And, as a result, one would expect that the probability that we reach our greenhouse gas reduction goals is less likely because your law reduces the potential consequences for failing to meet them!

Either Speaker Johnson is lying to the people of Vermont now about what this law does, or she and the legislators who pushed through this bill have been lying to GWSA advocates for the past two years.