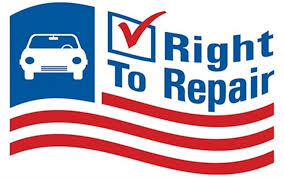 Here’s a heartening news report from Eric Boehm of Reason.com: ”The most expensive ballot initiative campaign in Massachusetts history ended with a resounding victory for property rights as voters approved the so-called "right-to-repair" ballot initiative.”

“With more than 96 percent of precincts reporting, nearly 75 percent of voters had approved Question 1. Car manufacturers will be now required to provide vehicle diagnostic data to consumers and independent mechanic shops. Voters approved a similar right-to-repair ballot measure in 2012, but this year's election closes a loophole that auto manufacturers had been using to skirt the requirements established by that earlier vote.”

“The Massachusetts Right To Repair Coalition, a campaign group formed by independent mechanics and national car repair chains like Auto Zone and O'Reilly Auto Parts, dumped more than $24 million into the race. The Coalition for Safe and Secure Data, a group backed by Ford, General Motors, Toyota, and other car manufacturers, spent more than $26 million opposing the initiative.”

“Consider the outcome of this expensive ballot initiative fight in Massachusetts to be one more small victory for freedom on an Election Day.”