Legislator Admits GWSA Will Have No Impact on Climate Change

Responding to an email inquiry from a concerned citizen about the real impact – and cost -- of the Global Warming Solutions Act, passed last spring over the veto of Governor Phil Scott (R), Representative Scott Campbell (D-St. Johnsbury) admitted, “Let me start by repeating that no one, least of all me, believes Vermont can stop climate change — or even affect climate change.  It’s tempting to focus on that narrow issue because of the specific metrics in the law, namely the required greenhouse gas reduction thresholds (leaving aside the unfortunate name of the Act),” and, “GWSA will not ‘mitigate’ climate change…” 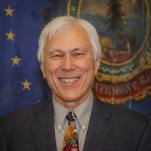 While we appreciate Campbell’s honesty in answering the question, he’s more than a day late and who knows how many millions of dollars short. More than late – non-existent -- it is worth pointing out that no one in the Vermont press corps has ever been willing to ask this very basic question of any of the GWSA’s advocates, perhaps because they knew what the honest answer is: “Vermont can’t stop – or even affect climate change.” Propaganda over information!

Nor did any legislator, Campbell or otherwise, ever do anything to disabuse their constituents of the myth that the Global Warming Solutions Act is actually some sort of solution for Global Warming. The youth groups that stormed the State House in support of the bill surely thought that the “bold action” the GWSA supposedly represented would have some meaningful impact. Would they have been willing to lay down in traffic for a bill that doesn’t do anything to keep the planet from, in their expectation, catching fire in ten years?

Campbell notes “the unfortunate name” of the GWSA, but he sat on the committee that crafted the bill and never attempted to change it to something not entirely misleading. There’s a word for that in the private sector. It’s “fraud.”

Vermonters deserved to know before the bill passed the truth about the total lack of benefit they will be getting in exchange for substantial cash payments (taxes), decreased economic activity, and a loss of living standards due to regulated or banned activities.

Rep. Campbell defends the GWSA, despite its total ineffectiveness at mitigating climate change, because, he says, the real purpose of the law is not to, “’mitigate’ climate change [again, tell that to all those high school students!], but it sets in motion preparing for it, building resilience, and mitigating the effects [emphasis original] of climate change on Vermont’s economy and communities.”

Really! This is kind of funny because those of us who suggested in the past that we can’t do anything to alter the changing climate but should rather focus on adapting to it have been lambasted as cynical “climate deniers.” Glad to see we’ve been right all along!

However, here is where Campbell’s logic loses it’s thread. If reducing CO2 in Vermont will have no mitigating impact on climate change, and the objective of the GWSA is to prepare for floods and other extreme weather events, why is all the focus and the spending on CO2 reduction? Weatherization, moving to renewable energy, etc? Acknowledging as Campbell does that this will have no impact, shouldn’t we be investing in bulldozers, concrete, and steel for sturdier roads and bridges? Shouldn’t we be pursuing more powerful, reliable, predictable and cheaper energy sources? After all, California’s transition to renewable energy left them remarkably un-resilient in the face of this past summer’s extreme weather in which wind and solar couldn’t meet demand for air conditioning, etc. amidst prolonged 110 degree heat. Rolling black and brown outs were the result.

This is what Campbell and his GWSA cohorts are setting us up for in the future: a hugely expensive program that does nothing to stop climate change, undermines our ability to adapt to it, and diverts resources away from real solutions.