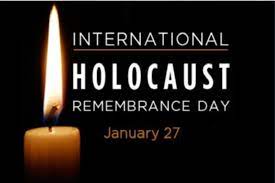 Today, January 27, is International Holocaust Remembrance Day. According to a 2020 study from the Claims Conference, an alarming number of individuals from age 18 to 39 know little about the Holocaust, and young Vermonters are little different in this regard. The Claims Conference has advocated for Jewish Holocaust survivors since 1951, distributing $90 billion in compensation.

The study looked at what young individuals in the US (broken down by state), the UK, France, Austria and Canada believed about the Holocaust.  Some highlights:

This 2020 study mirrors a more informal survey which found that 1 in 3 American & Canadian teenagers think Holocaust reporting is inaccurate. According to the survey released a few days ago, around a third of Canadian and American students question whether the Holocaust actually happened. The survey was commissioned by Liberation75, a Canadian organization committed to Holocaust education and remembrance. More than 3,000 students in grades 6-12 were surveyed before a two-day virtual Holocaust education conference. “One in three of our respondents stated that they believed that the Holocaust was fabricated or not reported in a way that was accurate to what actually happened,” said Alex Lerner, researcher and assistant professor of political science at the U.S. Naval Academy.

1 in 10 young Americans believes that the Holocaust never happened, while 23% think the number of those killed has been exaggerated.

Despite the thousands spent on educating each Vermont student, there are clearly important gaps in knowledge. There are few parts in history more important than describing what led from the slow buildup of the Nazi National Socialist German Workers' Party to the Holocaust.

As Holocaust survivor Elie Wiesel remarked in his book Night “for the dead and the living, we must bear witness.”