A bill in the VT legislature is set to double the deposit amount for beverage container deposits, and dramatically increase the number of redeemable containers. 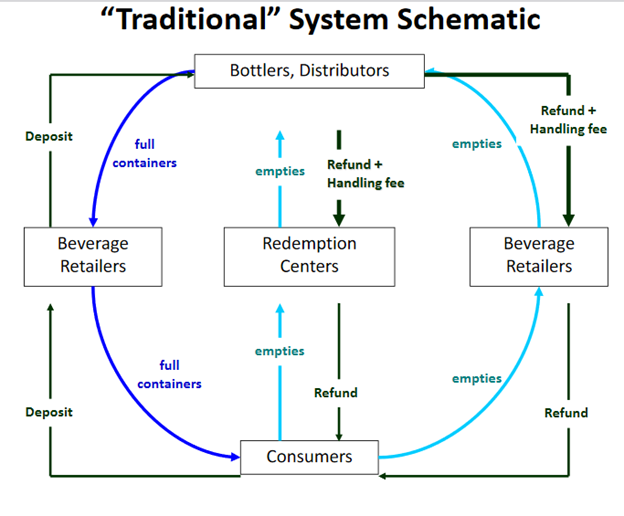 VT is one of only ten states with a deposit and redemption program, and if H.175 passes, would join only two other states, Oregon and Michigan, at the 10 cent deposit level, and slightly increase the handling fee currently reimbursed to redemption centers. While it seems like a small change in “small change,” over 180 million empty bottles and cans are redeemed across the state each year.

Email requests for comment from the House committee on Natural Resources, Fish, and Wildlife, including the bill’s sole sponsor, Rep. James McCullough of Williston, were not returned. The committee has taken extensive testimony from a variety of stakeholder experts.

Testimony from proponents indicate the goal would is to increase recycling and returned container rates, and possibly raise money for the state’s Clean Water Fund by collecting unredeemed deposits (the difference between the deposits Vermont distributors receive when products are sold in VT and deposits paid out for redeemed containers, collected through the various redemption locations).

The proposed change comes at a critical time for Vermont in several respects. The global pandemic has placed unprecedented financial and labor capacity pressure on the redemption centers, retail stores, and transfer stations who handle the sorting required to make the system work. Additionally, the market for recycled glass has dramatically reduced. The extent of which was revealed in a recent settlement between the Vermont Attorney General’s office and Chittenden Solid Waste District this past December. CSWD took in 17,900 tons of recycled glass between 2016 and 2018, and not having a market for it, “by disposing of it on its property, the waste district avoided having to pay to have it recycled elsewhere.” CSWD reportedly paid $400,000 as part of a settlement with the state.

The goal of increased recycling may be admirable, but experts testified we are already on par with the highest performing states. According to testimony on H.175 from the Vermont Beverage Association by Bree Dietly of Northbridge Environmental:

“Vermont and Maine already have the highest redemption rates in the northeast.  The systems are difficult to compare because they cover different products and are organized differently, but, aside from the anomaly of 2020, redemption rates in the commingling group were 86 percent in 2018 and 2019 – the same as Oregon in 2019 with a 10¢ deposit and close to Michigan’s 88 percent, also with a 10¢ deposit.”

Currently, a large percentage of redeemable containers can be commingled, meaning they are sorted by a few sizes, regardless of producer, as a result of being involved in a statewide program administered by Bree Dietly. However, a large number of small producers do not participate in the commingling program. Their containers must be sorted individually for distributors to reimburse redemption centers accurately. The following graph provided by Dietly gives an indication of the level of retail space and labor time required under the current system (different at each location).

“Expanding the law to include more beverages would absolutely overwhelm the redemption and collection infrastructure in Vermont. …it would add hundreds more sorts to the system – nearly all of which would be in the brand sort system, not commingling.  The space-constrained redemption areas would have to double or triple to accommodate the additional bins and bags for these new distributors and brands.  And, like some of the small brands in the system today, some of those bags could take months to fill up, so they take up space, but provide little revenue to the redemption centers. The labor to sort these containers is significantly greater because of the time to look up the brand, walk to the bin and sort it,” Dietly said. 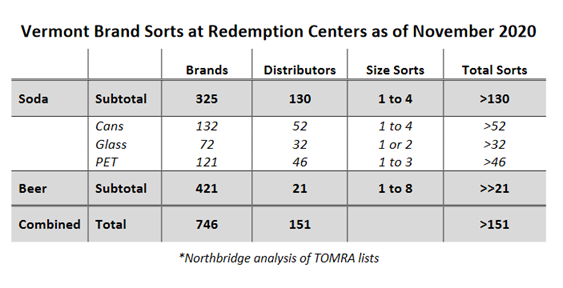 Fraud is also a major issue in the system which has the potential to escalate if the bill passes.

“A 10¢ deposit would open the gates to empty containers from across the borders and it would further promote the sale of products in bordering states and the transshipment of non-deposit containers into Vermont.  All of these are already problems to which we devote significant effort.  The Act 148 report issued by the Agency of Natural Resources in 2013 found that 20 percent of the beverage containers recycled, redeemed, or disposed in Vermont were not sold here.  That means one in five bottles and cans was bought outside the state and redeemed here.  With a 10¢ deposit, one could almost turn a profit buying certain products in New Hampshire and redeeming them in Vermont.  The savings at the time of purchase and the refund value would just about pay for the product.  Vermont does not need to export any more jobs and business to its border states.  And an increase in the deposit would have to at least be made in a harmonized fashion with neighboring states,” Dietly stated.

DSM Environmental analysis added to this conclusion noting; “Increasing the deposit to 10 cents without concomitant increases in NY and MA would certainly result in increased fraudulent redemption in VT.” In essence, there would be three borders of incentivized fraud, as opposed to just one (NH).

If the number of containers redeemed exceeds the number of deposits of VT-sold containers, distributors would be responsible for the difference, passing costs on to VT consumers, and eliminating any contribution to the state’s Clean Water Fund.

Siegler concluded “the expanded bottle bill would result in a maximum reduction in landfill waste in Vermont of 1 percent. …In my opinion expanding the bottle bill will do little to reduce landfill disposal and will significantly increase state-wide costs and consumer costs. Vermont would be better served to look past our history of bottle bills and look forward to expansion of extended producer responsibility for all packaging in Vermont.”

Vermont Beverage Association is also advocating for a system similar to the one in place in Oregon, which has been a 12 year process, according to Dietly via a phone interview, and believes the legislature hasn’t quite grasped how much work they’ve done in Oregon to be at the place they are now. “…our industry believes the centralized structure of commingling, taken to the next level as it has been in Oregon and as systems operate across Canada and Europe is a better model than we have here in the northeast. Rather than compound the problems with the current bottle bill, we encourage you to seek reforms of the system first, and then consider whether bringing additional products into the deposit system makes sense environmentally and economically,” Dietly concluded.

“The Vermont Brewers Association has no official position on this bill, and while our membership is a significant economic driver in Vermont, its contribution to the container load in Vermont is ultimately minuscule as compared to other segments.”

However, Montgomery has the unique perspective of also being on the management team of Hill Farmstead Brewery and Grassroots Distribution in Greensboro Bend. Hill Farmstead has won numerous awards, including best brewery in the world eight of the last nine years by the world’s largest beer community rating website RateBeer.com. They tried to participate in the commingling program but stopped.

“Given our position as manufacturers, distributors, and retailers of our own products, as well as those of other companies, we have a unique perspective on the system. Not only that, given the nature of our brewery, a significant amount of our product is purchased by people from out of state, as tourists or direct consumers—none of which is accurately or realistically accounted for under the current framework. Navigating the various layers of the existing system has presented a number of frustrations and challenges, both functionally and philosophically. From parallel product registration required with both ANR and TOMRA (the company who picks up redeemed containers across the state) to the multiple accounting requirements and formats, the process of remaining compliant has significant costs in time and resources, especially for a company as small as ours. Knowing that the system isn’t nearly as effective as it needs also runs counter to our company’s goals and philosophy,” Montgomery stated.

His recommendation was in line with the solutions presented by other experts. “It would be wiser, cleaner, and more transparent to levy a flat container tax on manufacturers and distributors, to include all products sent into Vermont from outside the state, and fully fund a state-wide recycling and deposit collection program,” he said.

Colchester Representative Patrick Brennan, who heard testimony on the bill in the House Committee on Ways and Means, also has decades of experience as a convenience store owner with redemption operations. He said, via phone, he has requested testimony from the state’s largest waste management company, Casella, but is not optimistic they will be heard before the bill progresses further.

“I worry about the large recycling operations, some of which have invested millions of dollars after Vermont went to mandatory recycling in 2012. They would be losing a huge percentage of their stream because of expanding the bottle bill. This would also increase the cost of recycling to the public. Cost of products would increase, during a time when Vermonters can least afford it. …It is very ironic this bill is being pushed by some of the same environmental groups that advocated for mandatory recycling a few years ago and are now so willing to throw these material recovery facilities under the bus. Very disheartening,” Brennan said.

After hearing about the potential impacts, Eric Davis, owner-operator of All Clean Waste Services in Northfield, stated “that’s a fair assessment.” “We average a couple tons of mixed recycling per week out of the transfer station in Northfield. Quite a bit more if you factor in routes. Many people leave their deposit bottles at the transfer station on Saturday because they don't want to wait in line for a couple bucks at the redemption center. We keep them aside and cash them in by the truckload to help offset recycling costs for other materials.” His costs, and the fees to his customers could potentially rise as a result.

The bill is currently assigned to the House Ways and Means committee for further review.