Americans are more likely to wear masks than Europeans and Canadians

The American media’s narrative the past few months has been “Wearing a mask in other countries is nearly unanimous. But Americans are too selfish to wear a mask for stopping COVID-19 transmission.” 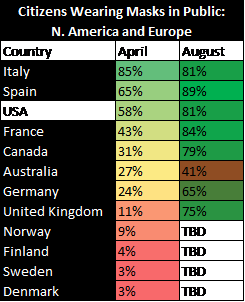 As it turns out, that narrative collapses when you do some quick analysis.

YouGov is conducting an ongoing survey of several North American and European countries. They ask “do you wear a mask in public?” 58% of Americans answered “yes” in April 2020. This was a higher percentage than Senator Sanders favorite ‘socialist countries’ Denmark (3%), Norway (9%), and Finland (4%). We also beat the UK (11%), Australia (27%), Canada (31%), Germany (24%), and France (43%). Only Spain and Italy claimed a higher percentage of mask wearers than the US in April.

As of August, several of these countries below us had narrowed the gap- such as the UK (75%), Germany (65%) and Canada (79%). But these 3 countries still fell below the US’ 81% for August. Only France leapfrogged the US, but we actually caught up to Italy, so we maintained our hold as the 3rd most frequently mask-wearing country in the Western world.  (Data had not yet been collected in Sweden, Denmark, Finland and Norway for August, but we can presume none of those countries which take a laissez-faire approach to mask wearing has actually caught the US).

While some in the media would like us to believe that universal mask wearing is only contentious in the United States, the data suggests it is just as contentious in other parts of the Western world, if not more so. The average American continues to be more likely than the average Westerner to wear a mask in public.