The House Commerce and Economic Development Committee took up H.366., An act relating to promoting economic opportunity for BIPOC-owned businesses. The bill is short; the meat of which reads:

“The Department of Economic Development shall design and implement the Black, Indigenous, and Persons of Color (BIPOC) Business Development Program, the purposes of which are: (1) to provide BIPOC-owned businesses with technical assistance, including financial literacy, digital literacy, and marketing; (2) to promote State and federal contract bid opportunities to BIPOC owned businesses; and (3) to provide training to business technical assistance providers to reduce bias i 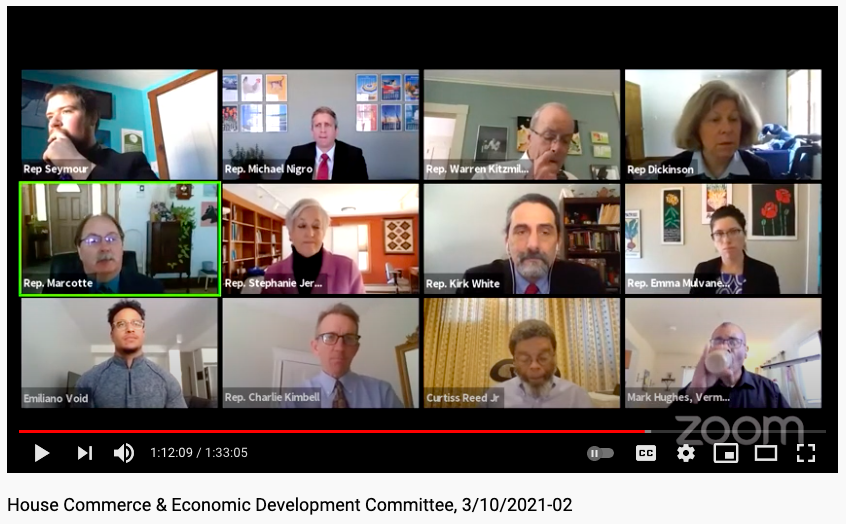 As testimony was coming to a conclusion, Rep. Charlie Kimbell (D-Woodstock) thought he was throwing the witnesses a softball question but was also raising a critical question about many existing economic development programs designed to help all businesses regardless of the race of their owners. If we’re going to create and fund a new program, where and how are the current programs failing?

KIMBALL: “A lot of the description of the struggles of small businesses that have been described today are universal, across any business that is starting: trouble accessing services, not knowing what to do, not having the financial literacy. And, so, we try to address that with general programs. And what you were saying is that the system was not set up and is not designed to really cater to people of the BIPOC community…. Can you tell us how… the community was not well served? I ask that question knowing that you probably have a twenty minute speech on that…. I’m just trying to get some specifics on that.”

It turns out Mark Hughes, Executive Director, Vermont Racial Justice Alliance, did not have a twenty minute speech, nor twenty seconds. He looked nonplussed and asked Kimball to restate the question. At first Kimball appeared to think Hughes was joking and laughed out loud before realizing the confusion was real.

KIMBALL: “Just thinking about what you were saying is that the system really wasn’t set up to be able to address the needs of the BIPOC business community. And I’m looking for specifics in which that has actually occurred, in trying to better understand that."

Hughes responded, “I don’t really have an answer for you now. You say specifics. Where I get thrown off on that question is when you say specifics.” He then recited some statistics and spouted some jargon before concluding, “But specifics I don’t have for you today.”

KIMBALL: “I think what you’re addressing is one of communication, making sure that these folks know that the programs are available. I’m trying to figure out if that’s the major issue or if it’s some kind of other nefarious program that’s going on.”

In other words, is the system itself actually racially biased, or are we just doing a poor job of making the BIPOC community aware that the system exists and how to access it? Again, Hughes couldn’t provide an answer, nor could any of the other witnesses in the meeting.

One would think that activists who are and have been for years dedicated to identifying and fixing systemic racism would be able to provide A) at least one example of some mechanism within a system(s) that is racist and responsible for disparate outcomes, and B) have some concrete suggestions for how to change the system(s) so that they will no longer be racist.

It’s telling that they can’t do this.

And herein lies the problem with the “systemic racism” argument, and why focusing on systemic racism won’t solve the problem of disparate outcomes between groups. The systems themselves are not racist, they are race neutral. They are not the problem. People who run or operate the systems may harbor racist tendencies, economic and cultural factors stemming from past policies may play a factor, all of which can have an impact on overall outcomes, but the systems, the laws, the rules do not. Therefore, you can’t fix the problem – help people in historically marginalized communities to realize their full potential – by changing the systems. It is other elements that that exist outside the systems that need to change. That’s harder work.

The systemic racism crowd is like the proverbial man looking for the glasses he dropped under the streetlamp because that’s where the light is, despite having dropped the glasses somewhere in the dark.

But, here’s what’s even worse. Bills like H.366 that seek to recognize, organize, and treat people differently based on race are, in fact, systemically racist. They are designed to systematically treat people of different races differently under the law. The intention may be good, to make up for past injustices, but the implementation is poisonous. Just as systemically racist policies of the past, such as Jim Crow laws, created anger, increased prejudice, reinforced tribalist divisions, and produced bad overall outcomes for our society, so too will policies that are every bit as race-based, just intending to disadvantage different demographic groups.