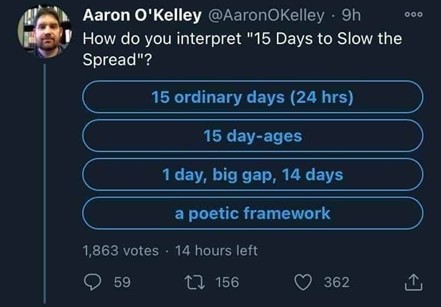 But it got me thinking, how long can we live under “a state of emergency” before Covid permanently changes the very structure of our federal and state government? One could argue we have been a state of emergency for the past 5 decades, as I noted back in 2019. The US had 31 ongoing emergencies even before Covid.

I’ve been reading Oren Gross and Fionnuala Ní Aoláin’s Law in Times of Crisis: Emergency Powers in Theory and Practice. Published in 2006, it feels like it could have been written in 2020.

The book was published with the US government’s reaction to the events of 9/11 clearly in mind, but the authors took pains to make their work applicable to government emergencies across all times and places.

"The word ‘emergency’ conjures “sudden, urgent, usually unforeseen event or situation event of situation that requires immediate action, often without time for reflection or consideration… for normalcy to be normal, it has to be the general rule, the ordinary state of affairs. Emergency must constitute no more than an exception to that rule- it must last only a relatively short time and yield no permanent effects.

As Cecil Carr notes: “Free people, when they temporarily surrender their freedom, will expect to see their inheritance restored to them when the storm is over. There will be two anxious questions- how large must that surrender be and how soon will that restoration come? Traditional discourse on emergency powers posits normalcy and crisis as two separate phenomena and assumes emergency is the exception… based on a clear separation of the normal and exceptional cases. The belief that a clear line can be drawn between normal times and times of exceptional threats to the nation underlies all of the models of emergency powers.”

The authors quote Frederick Watkins: “it is in this connection with the problem of temporary emergencies and in this connection only that the possibility of constitutional dictatorship can ever arise…when faces with situations of entrenched or prolonged emergencies, the Business as Usual model will come under strong pressures to allow the legal system to fight off the threat of the nation.

The longer the people live under the shadow of the emergency, the more likely they are to demand that the legal system accommodate the necessities of the situation. Continued adherence to the Business as Usual model in those circumstances may lead to adjustments to the system that are made in ways that are less transparent.

Eventually the system will reach a position where significant portions of the “ordinary” legal system will have been formulated and reformulated in response to crises. As emergencies become more prolonged and less exceptional it becomes harder to argue for a business as usual approach since it is clear that much is not as usual.”

As is usually the case, government emergencies last far longer than we anticipate. Emergency power is the most consistent threat to liberty, throughout the history of government. We must remain vigilant. Paradoxically, government may ask us to something- like wear masks- that we should probably do even if we lived in an anarchic society. But every day that we submit to government's authority, we must ask ourselves, is the threat large enough to the community that I should take precautions? Often, the questions is "which precautions should I take?" rather "should I take any precautions?"

I’d love to hear your thoughts on how Vermont and the US will change permanently from Covid-19. Send me an email at [email protected]

David Fleming is a policy analyst at the Ethan Allen Institute