Kudos to True North Reports for doing what the Secretary of State’s office and/or the Attorney General’s office refuse to do in Jim Condos’ unprecedented, Wild West, mail-everybody-a-ballot election, and that is create an online portal to report suspicious election activity. 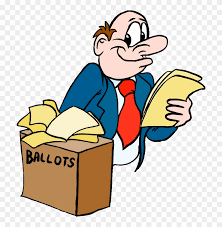 Check It Out Here: www.truenorthreports.com/ballotintegrity

In addition to the portal itself, TNR launched a modest radio and social media campaign making people aware of the service and what to be on the lookout for. Such things as:

This is an invaluable service as states that have newly adopted vote-by-mail programs have seen massive problems. Patterson, NJ, for example had to re-do an election after their mail in ballot experiment led to roughly 20% of all votes cast being rejected for error, likely fraud, or other issues. Scott Goslen, former Secretary of State from Colorado, who oversaw the transition in his state to a mostly vote-by-mail system recently did a review of Vermont’s proposed plan and was appalled by the total lack of security. (Read his ten page report HERE)

Proponents of Vermont’s vote-by-mail insist that vote fraud simply doesn’t happen, and mock the idea that anybody, given the chance, would stoop so low as to impersonate someone else to skew a result. But then they go and prove why vote-by-mail with zero ballot security is dangerous.

After TNR published its portal, several obviously false reports were filed. Some intended to be funny, such as, “I filled out my ballot and then a man knocked on my door and said he would mail it for me and when I did he cackled and said “This will please Lord Soros!” before turning into a bat and flying off. He forgot my ballot though so please send another bat. ”And others vicious, such as one stealing the identity of VTGOP Chairwoman Deb Bilado that read, “Hello yes I saw a black get to vote please fix this.”

These are exactly kinds of people who pose a real and present danger to the integrity of our elections. Anyone who would file such a false report and steal someone’s identity to do so is someone who would feel no moral prohibition about filling out someone else’s ballot if it errantly arrived in their mailbox, or organize others to do so on a larger scale.

Jim Condos’ and the Left in general’s policy toward vote fraud is see no evil, hear no evil, speak no evil. We, as citizens, don’t have to stand for that. We can be vigilant! So, thanks again to True North Reports for providing this service. And thanks to all the jerks to wrote false reports for illustrating exactly why it is so valuable and necessary.

-- Rob Roper is president of the Ethan Allen Institute